The 67,500-ton Liaoning was put into service Tuesday as nationalist sentiment surged in China following Japan’s nationalizing of the disputed islands in the East China Sea and ahead of a once-in-a-decade leadership handover slated for next month.

China’s bolstered naval might apparently poses a headache for the U.S. as it is refocusing on the Asia-Pacific, apparently to keep the Asian power in check and protect what it calls the “rule-based” order and freedom of navigation and commerce. 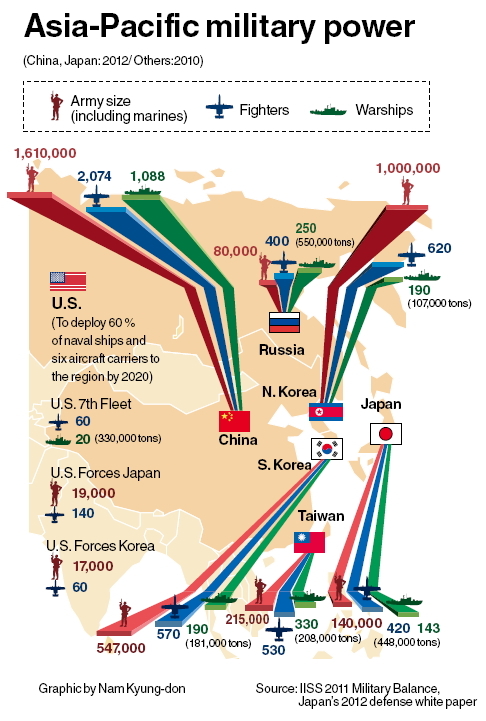 Washington’s deepened engagement in the region comes as it tightens its belt to tackle a fiscal deficit and grapples with Middle East conundrums including Iran’s nuclear ambitions and deepening anti-U.S. sentiment across the Muslim community.

In an impassioned display of its maritime ambitions, China held the commissioning ceremony for the carrier with President Hu Jintao, Premier Wen Jiabao and other leaders attending it. The vessel was refitted from a ship it bought from Ukraine in 1998.

Compared with America’s massive aircraft carrier battle groups, China’s refurbished carrier is not a much of a security concern, experts said. It is expected to take several years before the carrier has full-fledged operational capability.

“The carrier shows that the era of China’s blue-water navy has been ushered in,” Song Keun-ho, president of the Korea Institute for Maritime Strategy, told the Korea Herald.

“Though it may not be as advanced as America’s, China can use it to train its troops on how to manage the massive vessel and use it for aerial tactics and other carrier-based military operations. But what we need to pay more attention to is their efforts to build indigenous carriers in the future.”

Beijing plans to build two additional aircraft carriers to form three carrier battle groups by 2020. The plan is in line with its long-term, consistent operational strategy that covers not only the South and East China seas, but also virtually the entire world by 2050.

Observers note that based on this ambitious plan, China has encountered a slew of maritime disputes with Vietnam, the Philippines and others in the South China Sea where crucial sea lines of communication pass and vast reserves of untapped resources are buried.

What worries the U.S. and its allies in the region is what China intends to do with its naval buildup. It has dominated the academic security discourse with scholars debating whether China will remain a status-quo power or become a revisionist to challenge the order the U.S. has fostered since World War II.

Above all, what concerns Washington most appears to be China’s so-called anti-access/area-denial strategy, part of which involves its development of strategic assets such as coastal short- and mid-range anti-ship missiles and aircraft carriers.

To respond to that, the U.S. has been fleshing out a new military operational concept ― the “AirSea Battle.” It is to conduct integrated aerial and naval operations across all domains such as air, maritime, space and cyberspace.

Amid China’s economic, diplomatic and military rise, its stance has grown more aggressive and uncompromising in territorial spats, particularly one with Japan, America’s major Asian ally.

Tokyo’s decision to purchase the islands called Senkaku in Japan and Diaoyu in China is a “farce,” Xi Jinping, China’s leader-in-waiting, said during U.S. Secretary of Defense Leon Panetta’s visit to Beijing earlier this month. His visit was apparently aimed at defusing sino-Japan tension over the islands.

The maritime disputes where fishing grounds and allegedly abundant resources are at stake could spiral out of control and escalate into warfare, observers fear. Secretary of State Hillary Clinton recently called for their resolution “without coercion, intimidation, threats and the use of force.”

Washington has been carefully watching the dispute over the Senkaku islands as it could be drawn into the conflict should any hostilities break out considering that it has the 1960 Mutual Cooperation and Security Treaty with Japan. Beijing also has a jurisdictional dispute with Seoul over the submerged rock in their overlapping exclusive economic zones.

As Washington carries out an austerity policy following a decade of war in Iraq and Afghanistan, engaging in any additional conflict is highly burdensome, analysts note.

Washington has demanded that Seoul pay more of the so-called burden-sharing cost to maintain its 28,500 troops on the Korean Peninsula while reportedly calling on Tokyo to shoulder the partial cost of relocating some 4,000 U.S. marines to Guam.

Some raised the possibility that in case of a diplomatic failure over the dispute and Japan’s loss of the islands, America’s preponderance in the region could be harmed and the security contours could face a significant shift.

The commissioning of the aircraft has apparently unnerved Japan where the political right-wingers have raised their voices to shore up national pride sapped by the prolonged economic malaise and a series of natural disasters.

Observers say that China’s military buildup may lead Tokyo to push more aggressively to become a “normal state” with a full-fledged military and depart from the pacifist constitution that bans its right to wage war and possession of war materials.

Japan has moved toward the recognition of its collective self-defense right ― the use of force to respond to an attack on an ally, namely the U.S. ― and paved the way for the nuclear armament through a legal amendment.

“China has been more assertive this year than many expected, and that could be explained by the circumstances ― the Party Congress in October and the election of its new leadership, the slowdown in the Chinese economy, and the rising voice of those in China who oppose the approach of biding time and hiding capabilities,” said Patrick M. Cronin, senior director of the Asia Program at the Center for a New American Security.

“There would appear to be those in the Party and the military in China who are tired of being patient, feel China is being pushed around, and would like to exercise their influence to press their claims.”

Some observers argue that China’s territorial claims could further increase should it use them to deflect public attention from democratic aspirations and pent-up frustration over a deepening economic polarization and regional division.