KABUL—The top commander in Afghanistan said U.S. war strategy over the next year will begin to shift to an approach that allows Afghan troops to take the lead while Americans serve as advisers.

Such a change in mission has been discussed in Washington, but Tuesday's comments by Marine Gen. John Allen point to a definite timetable for a strategy shift that U.S. officials hope will better prepare Afghan security forces to take responsibility for securing the country.

Afghan police officers taking part in military training in Herat province last week. The U.S. is drawing down its troop presence in the country.

Some Obama administration officials pushed for such a transition in the strategy, which defense analysts have said could allow the U.S. to draw down forces more quickly and speed the development of Afghan security forces.

Gen. Allen said no decisions have been made about future troop reductions. The U.S. force will fall to less than 70,000 by the end of next summer, from a high of more than 100,000, and President Barack Obama has said he wants steady reductions to continue.

Privately, Gen. Allen has told visiting congressional delegations that he wants to avoid further reductions until 2014, but told reporters on Tuesday that discussions about troop levels and strategy were continuing and that there was "no daylight" between him and the president.

The new advisory teams, Gen. Allen said, "in many respects will be a preview of how we see our forces postured in the years to come."

Since 2009, when Gen. Stanley McChrystal took charge of the North Atlantic Treaty Organization's military command in Afghanistan, American military units have partnered with Afghan security forces. The arrangement was designed to involve Afghan units in U.S. military operations, where they would be trained to plan and execute their own missions.

Eventually, U.S. units partnered with Afghan units will move to an "overwatch" role, Gen. Allen said. Those units would avoid participating in day-to-day operations, but would be able to assist if needed. 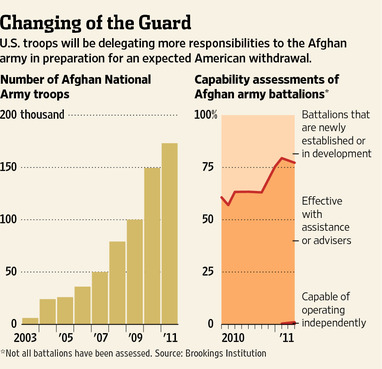 Gen. Allen declined to predict when the bulk of the U.S. effort would become advisory.

"The crossover point remains to be determined," Gen. Allen said. "That will come from the detailed planning that will emerge from this discussion of the evolving strategy over the next couple years."

Andrew Exum, a senior fellow at the Center for a New American Security, said Gen. Allen's strategy could face resistance from U.S. military units, which still want to fight Taliban insurgents directly. But he said the shift to increase the advisory effort was the right move, and should have been done in connection with the U.S. troop surge in Afghanistan.

"One of the mistakes we made in 2009 was not insisting on a robust advisory mission to compliment U.S and allied combat operations," Mr. Exum said.

Gen. Allen said current counterinsurgency operations will continue next year, especially in the eastern part of Afghanistan. For the past two years, the U.S. has focused its main military effort in southern Afghanistan, in Helmand province and Kandahar, trying to roll back gains made by the Taliban.

The U.S. has had too few forces to mount a full offensive in the east. But Gen. Allen said he plans "to conduct significant operations" there next year.

The U.S. saw significant gains in the south only after two years of hard fighting. Gen. Allen wouldn't predict how long it would take to rout insurgents from the eastern part of the country, but suggested progress could be faster.

"It may not take as long in the east as it did in the south," Gen. Allen said. "The south was pretty tough and we started from zero there. We have been operating in the east for some time."

The Afghan-Pakistan border remains closed to NATO resupply convoys in the wake of a Nov. 26 incident in which 24 Pakistani soldiers were killed by a U.S. airstrike.

NATO commanders working on the border have been told to continue operations as if the tensions with Pakistan didn't exist.

"The intent is to restore as much normalcy as we can to the border coordination as early as we can," Gen. Allen said.