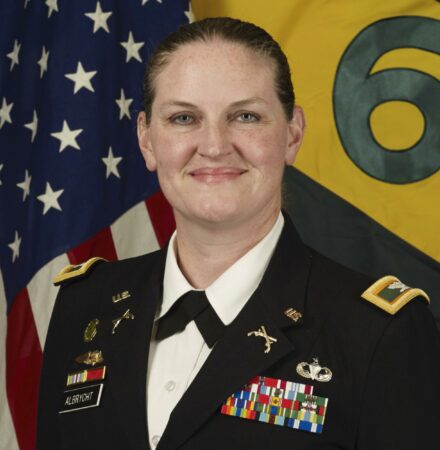 Colonel Sarah Albrycht is a former Senior Military Fellow at the Center for a New American Security.

COL Albrycht is a United States Army officer with over 24 years of experience in military policing. She is an expert in the use of policing in both peace and war; spanning domestic, humanitarian, and combat operations. COL Albrycht led numerous initiatives to provide senior Army leaders with recommendations and context on the prevention, investigation, and effect of crime within the Army. She has experience in detention operations, Law of Armed Conflict, biometric/forensic enterprises, identity management, benefits delivery and talent management.

Prior to joining CNAS, COL Albrycht briefly served as the Executive Officer to the Secretary of the Army after relinquishing command of a brigade for Criminal Investigations Command. Her assignments include command at every level up to brigade, a joint tour at United States Army Northern Command and experience on both the Office of the Secretary of Defense and Army Staff. Sarah has served in every geographic combatant command and has operational tours in Haiti and Afghanistan, including during the initial phase of Operation Enduring Freedom in 2001.

Sarah entered the United States Army and was commissioned through the Reserve Officer Training Corps as a Distinguished Military Graduate from the University of Massachusetts at Amherst in 1995. She received her Masters of Policy Management from Georgetown University in 2006 and her Masters of National Strategy from National War College in 2017.