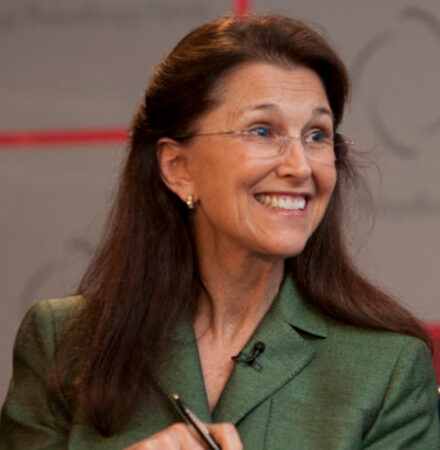 Jane Wales is Vice President of the Aspen Institute and Director of its Program on Philanthropy and Social Innovation. She served as President and CEO of the World Affairs Council from 1998-2019. She is the Founder of the Global Philanthropy Forum and co-host with Ray Suarez of the nationally-syndicated National Public Radio interview show WorldAffairs.

Previously, she served in the Clinton Administration as Special Assistant to the President and Senior Director of the National Security Council. She simultaneously served as Associate Director of the White House Office of Science and Technology Policy, where her office was responsible both for advancing sustainable economic development, through science and technology cooperation, and for developing policy for securing advanced weapons materials in the former Soviet Union. In the Carter Administration, Wales served as Deputy Assistant Secretary of State and as Coordinator, Public Liaison, at the White House.

In the philanthropic sector, Jane Wales chaired the international security programs at the Carnegie Corporation of New York and the W. Alton Jones Foundation, and she directed the Project on World Security at the Rockefeller Brothers Fund. From July 2007 to July 2008, she also served as Acting CEO of The Elders, chaired by Archbishop Desmond Tutu and founded by Nelson Mandela. In 2008, Ms. Wales also chaired the Poverty Alleviation Track for the Clinton Global Initiative Annual Meeting. She is the former National Executive Director of the Physicians for Social Responsibility, which shared in the 1985 Nobel Peace Prize during her tenure.

Ms. Wales serves on the boards of the Center for a New American Security (CNAS) and OpenCorporates, and chairs the board of FSG, a management consulting firm serving the philanthropic sector.