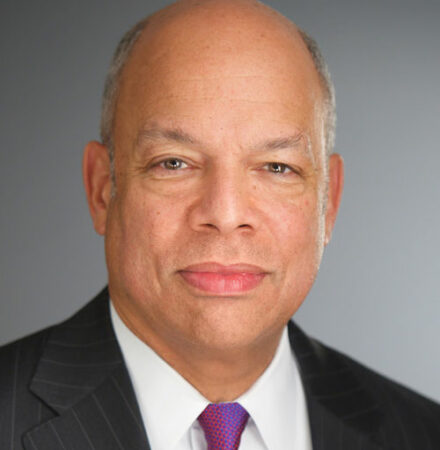 Jeh Johnson is the former U.S. Secretary of Homeland Security. He served in that position from December 2013 to January 2017. Johnson now practices law again in New York City at Paul, Weiss, Rifkind, Wharton & Garrison, LLP. Johnson has been affiliated with Paul, Weiss off and on since 1984, and he was elected the firm’s first African American partner in 1993. Johnson now serves on the Management and Partnership Committees of the firm. In private life Johnson is also a regular commentator on NBC, CBS, ABC, MSNBC, CNN, FOX, FOX Business and Bloomberg News. He is on the board of directors of Lockheed Martin, the Council on Foreign Relations, the Center for a New American Security and the 9/11 Memorial and Museum in New York City.

Johnson is a graduate of Morehouse College (1979) and Columbia Law School (1982), and the recipient of ten honorary degrees. He has debated at both the Oxford and Cambridge Unions in England and is an honorary life member of the Cambridge Union.

In December 2018 Johnson was presented with the Ronald Reagan Peace Through Strength Award at the Reagan Presidential Library in California, for “contribut[ing] greatly to the defense of our nation,” and “guiding us through turbulent times with courage and wisdom.”