Today we’ll round out the Natural Security team’s three part comparison of the recently released 2010 Joint Operating Environment (JOE; PDF) and its predecessor the 2008 JOE (PDF). Be sure to check out Christine’s comparison of the two energy sections and Will’s comparison of the sections on climate change. Today, I’ll be looking into how both JOE reports view the roll of food in the security environment.

While I would have liked to have seen some evidence of new thought on the topic, the 2010 and 2008 JOE are remarkably similar on food (with only slight modifications made to the text, mostly to adjust tense and grammar). Regardless, the 2010 JOE (reiterating the 2008 JOE) does offer some very good Natural Security insights into food and agriculture. First, touching on the role that military forces may have to assume in assisting in food relief operations:

How quickly the world reacts to temporary food shortages inflicted by natural disasters will also pose challenges. In such cases, the Joint Force may find itself involved in providing lift, logistics, and occasionally security to those charged with relief operations.

For me, this statement drums up memories of recent news reports on violence and armed personnel surrounding food convoys during Haiti’s earthquake relief operations.

The JOE continues on with concerns over the devastating and destabilizing knock-on effects of famine, stating:

There are reports of a new aggressive strain of this disease (Ug99) spreading across Africa and possibly reaching Pakistan. Blights threatening basic food crops such as potatoes and corn would have destabilizing effects on nations close to the subsistence level. Food crises have led in the past to famine, internal and external conflicts, the collapse of governing authority, migrations, and social disorder. In such cases, many people in the crisis zone may be well-armed and dangerous, making the task of the Joint Force in providing relief that much more difficult. (emphasis mine)

The brief food section also includes issues around access to fish resources, what I imagine to be the favorite part of the entire JOE document for fellow Natural Security team member and fishery aficionado, Will Rogers.

Competition for access to [fish] resources has often resulted in naval conflict . . . the use of warships and coastal protection vessels to ram and board vessels. Over-fishing and depletion of fisheries and competition over those that remain have the potential for causing serious confrontations in the future.

Interestingly, even the graphs that the JOE provides appear to be cut and pasted from the 2008 version into the 2010 version, save some stylistic changes, both projecting grain use and demand to be at exactly 2 billion tons for their given years (see below).

But perhaps the bottom line for the Joint Force is best articulated, both in the 2008 and 2010 JOE, with the following: “food becomes a weapon every bit as important as ammunition.” 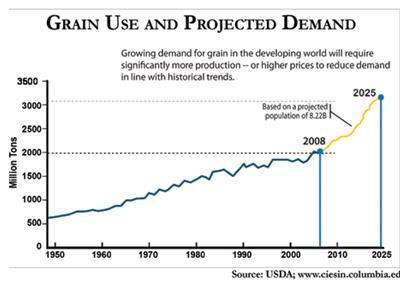 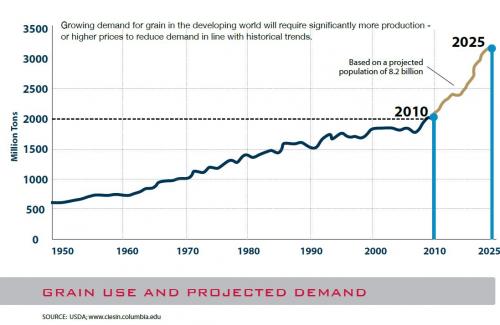