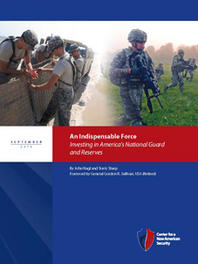 On Monday, CNAS Commander-in-Chief John Nagl and my officemate Travis “Charlie” Sharp released their thought-provoking report on the state of the National Guard and Reserves, An Indispensable Force: Investing in America’s National Guard and Reserves. The biggest takeaway for me (and the report is worth reading in full), is that the Department of Defense has not adequately defined the future roles and missions of the Guard and Reserves, which it was legally required to assess in the 2010 Quadrennial Defense Review (QDR) but failed to do.

But what do the National Guard and Reserves have to do with Natural Security? Well, considering that the future security environment is likely to be complex and shaped by nontraditional security challenges, such as from failing or failed states, humanitarian and natural disasters, resource competition and climate change, it is very important to understand what role the National Guard and Reserves, which constitute 43 percent of the total U.S. military manpower, will play in the future security environment. According to Sharp and Nagl:

Because the QDR establishes DOD’s future strategic and budgetary priorities, the omission minimized the relevance of the Guard and Reserves beyond the current conflicts and perpetuated DOD’s historical reluctance to think presciently about their role in U.S. national security strategy.

So what could the future roles and missions look like for the Guard and Reserves? As Nagl and Sharp wrote:

The QDR emphasized nontraditional security threats such as failed and failing states, WMD terrorist attacks, hybrid warfare combining high- and low-tech tactics, and the potential disappearance of shared access to the global commons in air, sea, space and cyberspace. . .

Many of these complex missions require specialized skills, and one of the strongest arguments in favor of maintaining a strong operational reserve component is the opportunity for the U.S. military to draw upon cutting-edge skills and knowledge from the civilian world. Reserve component service members’ civilian backgrounds and careers provide them with expertise, particularly in specialized and high-tech fields, that is generally difficult to locate, train and retain in the active component.

Of course, the greatest examples of this, which we have covered extensively here on the blog and in several of our reports, including Broadening Horizons: Climate Change and the U.S. Armed Forces and Sustaining Security: How Natural Resources Influence National Security, are what National Guard teams are doing in Afghanistan to help build local capacity and capability around agricultural development. For example, many of the National Guard agricultural teams deployed to Afghanistan have included soldiers who are agricultural and environmental experts in their civilian careers, bringing their specialized skills to bear.  “Senior Pentagon officials have reached similar conclusions,” about the benefit of leveraging the specialized skills Guards and Reserve soldiers bring with them, Nagl and Sharp acknowledged:

As Gates wrote last year about National Guard agricultural specialists serving in Afghanistan, a country that employs nearly four-fifths of its labor force in agriculture, “More programs like this can be developed and we are working with the Services and their Reserve components to find appropriate force structures that can capitalize on the professional skills of reservists and Guardsmen, while not detracting from the readiness in our conventional formations.”

Of course, arguably one of the most important functions that the National Guard and Reserves support is the defense of the homeland. As Nagl and Sharp pointed out:

As a force “forward deployed” in communities throughout the United States, the Guard and Reserves are uniquely suited to perform DOD’s homeland response and civil support mission, which became exponentially more important after Sept. 11. Homeland response and civil support involves providing defense capabilities to federal, state and local civilian agencies in the wake of a disaster.

Climate change could – in my opinion – be one of the nontraditional security challenges that shape the future roles and mission of the Guard and Reserve. Consider the following: climate change could potentially increase the intensity and frequency of storms that impact communities, particularly in parts of the country already prone to tropical storms and hurricanes, which could require a greater response from the Guard and Reserve to provide disaster relief. Indeed, some federal agencies responsible for coordinating first responder efforts are hedging against this by conducting scenario planning that use Hurricane Katrina as their baseline in order to understand and prepare for the scale of relief efforts that may need to be executed under these scenarios.

Still, according to Nagl and Sharp, “DOD’s specific homeland roles and responsibilities remain unclear to many of the Pentagon’s federal and state agency partners, especially during scenarios demanding the fully integrated commitment of civilian and military resources.” And as Nagl and Sharp both pointed out, “After the tragic domestic disasters of the past decade, the American public now holds a ‘zero tolerance’ attitude toward delayed or mismanaged disaster response by the federal government.”

I really recommend you give the report a read. And if you are downtown tomorrow, come join us for the official report launch at the Willard Hotel from 1:30 PM to 3:00 PM.