I got this book for my brother Chris, a lover of diving and travel humor, for Christmas after a friend recommended it on Facebook. Having not read it and purchased it for title and cover alone, I decided to read a bit of it myself to make sure that it wasn’t a completely crappy Xmas present. No up-front intention of trying to tie it to natural security.

Try as I might to escape thinking about work, it turned out that To Hellholes and Back: Bribes, Lies, and the Art of Extreme Tourism by writer and editor Chuck Thompson had a few relevant passages.

The premise of this book is that he travels to the four places on Earth he is most afraid to travel: the Democratic Republic of Congo, India, Mexico City and Walt Disney World.

In thinking of places from which energy, minerals and other resource imports originate, it’s helpful to get some situational awareness even if you can’t put feet on the ground there. Thompson provides just that, and in spades, for the Congo. He puts much emphasis on the low quality of the roads in Congo (most of which are not really roads), and the rampant bribery. He proves out that if we talk about corruption and sweetheart deals with other countries to export minerals, we must remember that the same is often true just for crossing bridges and entering some buildings in that country. Here are a few passages of how Thompson conveys the DRC’s resource issues:

“As for the DRC itself, it’s a massive country bordering nine nations and encompassing as much land as the entire United States east of the Mississippi. Despite vast natural resources – copper, cobalt, diamonds, gold, rubber, oil, timber – mismanagement, corruption, and war have conspired to lock the country in perpetual poverty.”

And in recounting a conversation with his guide, Henri:

Thompson (sometimes directly and sometimes indirectly) drives home just how poor governance is in the DRC, though he describes this, war and corruption as almost systemic characteristics divorced of agency. This is travel writing, so there’s likely no reason to fully delve into exploring the causes of the country’s conditions, however I would bet a few dollars that any political science-y attempt to do so would do no better at fully satisfying curiosity as to why things are as they are.

The author then moves onto India, and sets the scene by describing in brief three major issues causing misery there: terrorism; climate 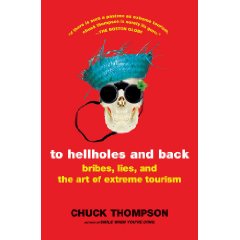 change and degradation; and peak oil. This choice of topics is interesting in itself. As he writes:

“India receives 5 percent less sunlight than it did twenty years ago due to a cloud of airborne particles released by industrial plants that filters sun year round. The World Health Organization claims that air pollution is responsible for 527,000 deaths in India each year. The country’s rivers are toxic dumps. If global warming is going to strike North America with a vengeance, India is the place where we’ll get a preview of the horror…Gloom and ruin are inescapable in any newspaper or TV news program. Military conflicts. Water shortages. Overpopulation. Poverty. Pollution. Yet another humiliating cricket defeat at the hands of the Sri Lankans. If the world is going to hell in a handbasket, it seems inevitable that the handbasket will be made in India.”

Pretty sad on its face, though as Thompson travels through India he realizes that with all the terrible conditions he finds, all is not totally hopeless. This reminded me of a conversation I had about a year and a half ago with two officials from Pakistan’s water and power ministry. One was deeply concerned about environmental issues, and particularly decreasing levels of drinkable fresh water. I asked about India’s increasing demands on shared river systems and the prospect of it dwindling Pakistan’s resources, and the second official replied with a shrug: “We’ve had water problems for hundreds of years, and we’ll keep having them for hundreds more.” He wasn’t too concerned at that time. In thinking through which natural resources issues have the potential to become security concerns specifically for the United States, it’s good to be reminded that most people in this world are acclimated to pretty harsh conditions – not a revelation obviously, but we do forget to contextualize too often in thinking through U.S. policy options. In this sense, Thompson’s book offers a valuable reality check that’s important for security analysis of any kind.

Overall, even if not for natural security reasons, I highly recommend giving this book a read. And if anyone is still wondering from the first paragraph: yes, my parents named their children Chris and Christine.