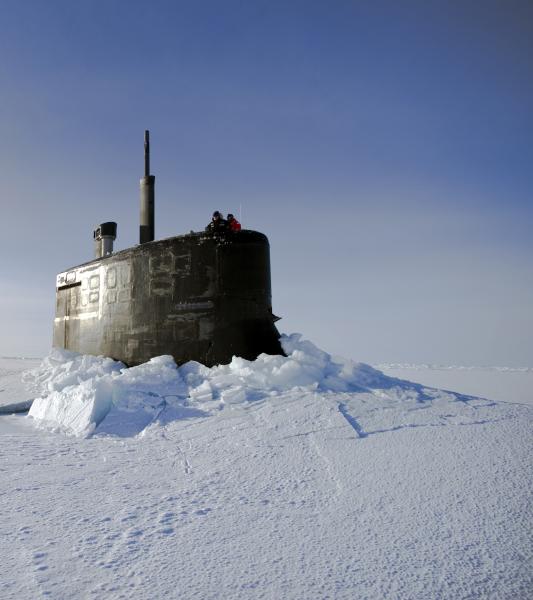 Today the Center for Climate and Energy Solutions – C2ES, formerly the Pew Center on Global Climate Change – is releasing a new report, Climate Change & National Security: The Arctic as a Bellwether. The lead author of the report is Dr. Rob Huebert, Associate Director of the Centre for Military and Strategic Studies at the University of Calgary.

Official military doctrine in the United States now holds that “climate change, energy security, and economic stability are inextricably linked.” Nowhere is this linkage more clearly illustrated than in the Arctic, and that’s why we think the region is a bellwether for how climate change may reshape global geopolitics in the post-Cold War era.

As the planet has warmed over the past few decades, temperatures in the Arctic have been increasing at about twice the global rate. And the Arctic sea ice cover has been shrinking much faster than scientists anticipated. The five smallest sea ice covers ever recorded have all occurred in the past five summers. As a result, the Northwest Passage through the Canadian Archipelago has opened up every summer since 2007, and the Northeast Passage along Russia’s coastline has opened up every summer since 2008.

New and expanded shipping routes through the Arctic can cut the distance to transport goods between Asia, North America, and Europe by up to 4000 miles. We’re seeing increased interest and investment in oil and gas exploration. The United States Geological Survey estimates that 30 percent of the world’s undiscovered gas and 13 percent of undiscovered oil lies in the Arctic. Russia likely possesses the largest share of any country. There’s also growing interest in tourism and fishing.

As the economic potential of the Arctic becomes more apparent, governments and militaries have begun to reposition themselves. What’s happening in the Arctic is the starkest example yet of the way climate change directly affects international security.

To understand how governments are responding to the rapid transformation of their northern borders, we carefully examined recent policy statements and actions of the Arctic states, as well as other interested states and multilateral organizations. A clear starting point was August 2007, when the Russians planted their flag at the North Pole, signaling their intent to extend their sovereign territory as far out to sea as possible. At virtually the same time, Canada announced significant new Arctic military investments aimed at protecting their sovereign control of shipping lanes through the Canadian Archipelago.

Here are the main findings of our analysis:

Although all of the Arctic states emphasize the need for cooperation, most have begun to rebuild their military capabilities beyond a mere policing capacity. At the same time, existing multilateral institutions are too weak to ensure that collegiality will prevail should disagreements become entrenched. Based on our findings, our principal recommendation is that the Arctic states move quickly to strengthen existing multilateral mechanisms before resource competition and core national interests take center stage.

The best way to strengthen multilateral cooperation is for the Arctic Council to lift its ban on discussing military issues. The Council includes all of the Arctic nations and has functioned well in its 16 years. Failure of the Council to manage military issues threatens to create a piecemeal, ad hoc governance system that may prevent the level of coordination needed to resolve future disputes in the Arctic.

Another key step toward maintaining a cooperative geopolitical environment in the Arctic is for the United States to accede to the Law of the Sea treaty. The U.S. military has long supported ratification of the treaty, and as long as the United States is not a member, it is unclear whether it will be eligible to dispute claims by the member states, even if it is willing to adhere to the treaty’s terms.

At the same time, care must be taken in how multilateral mechanisms are used in the Arctic. For example, if NATO were to play a more assertive role, and if Finland or Sweden were to pursue membership in NATO, Russia might feel isolated or threatened. That’s a situation we should try to avoid.

The widely held notion that climate change will occur gradually over the 21st century, allowing ample time for society to adapt, is belied by the unprecedented pace of both climate change and policy developments in the Arctic today. Such rapid changes will challenge governments’ abilities to anticipate and diplomatically resolve international disputes within the region.

If the Arctic is a bellwether for how climate change may reshape global geopolitics in the post-Cold War era, then other countries should watch closely to learn from our successes or failures in managing this new breed of security challenge in the North.

Photo: A Seawolf-class submarine, the USS Connecticut, after surfacing through the Arctic ice during ICEX 2011. Courtesy of Mass Communication Specialist 2nd Class Kevin S. O'Brien and the U.S. Navy.