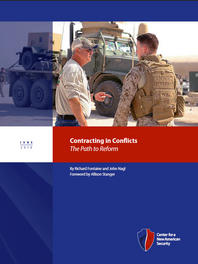 Changes in the character of warfare are accelerating the growing reliance on contractors on the battlefield. . . Long-term nation-building efforts like those in Iraq and Afghanistan require an array of functions – from advising and training foreign security forces to constructing and maintaining power plants and waterworks – that the U.S. government is not manned to carry out on its own

This is a passage under the heading “The Changing Nature of Conflict,” in CNAS’s new report, Contracting in Conflicts: The Path to Reform.

Though discussion of Natural Security issues don’t figure prominently in the report, Richard Fontaine and Dr. John Nagl, the report’s authors, have teed up an array of topics to be explored deeper by persons such as myself. In addition to the abovementioned “power plants and water works,” Contracting in Conflict explains that contractors have found themselves filling the position of agricultural technician, energy infrastructure (re)constructionist, supply convoy security and a host of other necessary roles in the modern battlefield, both during and after the actual battle.

The report hits on some interesting concerns over the rapid growth of contractors since the end of the Clinton administration. The then new Bush administration watched as “federal spending on contracted services more than doubled” between 2001, according to Fontaine and Nagl. A common theme running through the contract report was the dire need for a regulatory system and oversight, as, and I can’t believe I’m agreeing with this, the federal government’s oversight and bureaucracy is not robust enough to handle the increase in federal defense contracting since 2001, especially during the surge of contractors in Iraq and Afghanistan.

Why does this matter to Natural Security? As Senator Bennett put it during a Senate Homeland Security and Governmental Affairs Ad Hoc Subcommittee on Contracting Oversight hearing held earlier this year on reconstruction and development contracts in Afghanistan, “when our government agencies outsource their work they also outsource the results;” which is a gamble the United States should not be taking when it comes to national security. It raises some interesting questions and concerns about contractors in a development role. For example, without the proper contracting oversight, we may find ourselves with a Xe Services level security breach, be it incomplete agricultural initiatives, or insecure fuel convoy security. . .  oh wait, too late?