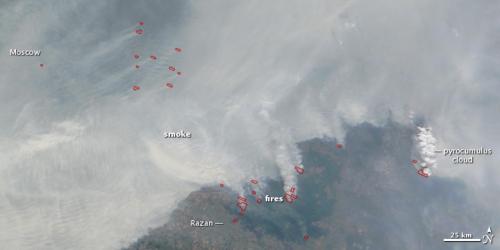 Could Russian President Medvedev’s recent statement on climate change be the beginning of a change in attitude among skeptical world leaders (and others in their country) that climate change threatens security and the world needs to respond?

You’ll recall that we first reported on Russia’s dramatic drought and wildfires last month, but the situation has grown even worse: as of July 30, the wildfires had scorched more than 25 million acres of grain – what Time Magazine reported as an area equivalent in size to the state of Kentucky – which has affected food prices throughout Russia and prompted the government to declare a state of emergency in many parts of the country. Time reported on Monday that the wildfires, which have also destroyed 1,500 homes in more than a dozen regions, provoked comments from President Medvedev that suggest that Russia’s extended drought and summer wildfires could be linked to global climate change, noting that the “weather is anomalously hot” and that “What's happening with the planet's climate right now needs to be a wake-up call to all of us, meaning all heads of state, all heads of social organizations, in order to take a more energetic approach to countering the global changes to the climate.”

The statement could be a reversal in Russia’s stance on climate change depending on how the country proceeds with climate negotiations in Cancun this fall. Just last year, before the Copenhagen Conference in December 2009, President Medvedev said that Russia’s greenhouse gas emissions would continue to increase by as much as 30 percent by 2020 and that the country had no intention of cutting its development potential by agreeing to emissions reductions. But with the latest call for “all heads of state, all heads of social organizations…to take a more energetic approach to countering the global changes to the climate,” one wonders if Russia intends to walk the walk.

Medvedev's comments do raise an interesting question about attitudes toward climate change on the world stage. If more countries begin to see more dramatic effects that could be linked to a changing global climate – the kind of effects that are less easy to ignore, such as Russia’s wildfires, or perhaps even the severe flooding in Pakistan, or China – could those concrete links to state security change global attitudes on the need to reduce greenhouse gas emissions?  It’s not really clear. And certainly one would hope that global attitudes change before then. Otherwise, aren’t we just the proverbial frog in a beaker of slowly boiling water (see Nicholas Kristof’s New York Times op-ed from a few weeks ago)? Can we jump out of the beaker before it’s too late?

Nevertheless, it'll be interesting to watch how changes in the climate and the felt effects affect countries' negotiating positions in Cancun at the end of November. We'll be watching.