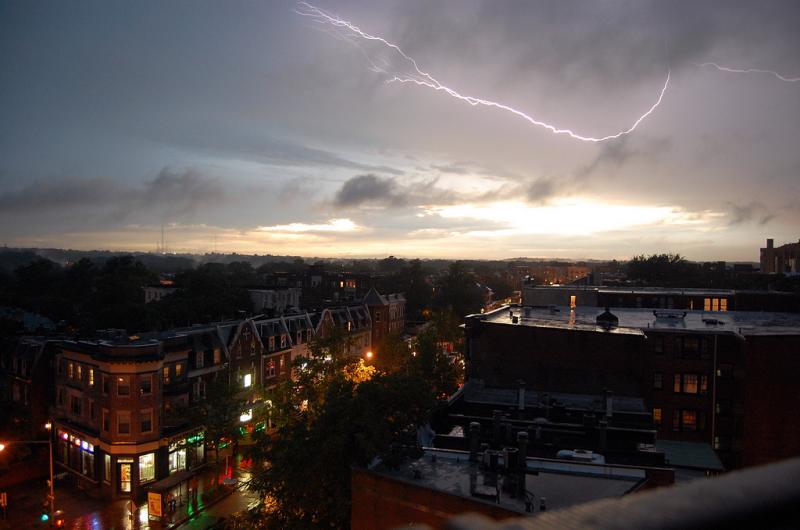 A deadly stretch of thunderstorms known as a derecho pummeled the Washington area Friday night and other parts of the mid-West and East Coast, leaving more than a dozen dead and millions without power amid a record heat wave.

“The damage was most severe in the Washington suburbs of Northern Virginia and Maryland, where some residents huddled in their basements as the storm ripped through the area, blowing down trees, upending lawn furniture and tearing off roof shingles,” The New York Times reported on Sunday. “President Obama telephoned the governors of Ohio, West Virginia, Maryland and Virginia, all of whom declared states of emergency. Gov. Bob McDonnell of Virginia said his state had suffered the largest ‘non-hurricane power outage’ in its history.”

The impacts of the storm have been far reaching. By Saturday, more than 3 million people were affected by power outages. Emergency 911 call centers were offline in parts of Virginia and elsewhere. Officials urged residents to conserve water as utility crews worked to restore access to critical services, including water-pumping stations. Many gas stations remained closed. Residents endured near-record temperatures without air conditioning. Some super markets exhausted their supplies of bottled water and ice packs. In some states, national guard troops have been deployed to help direct traffic and check on residents in areas where first responders were over stretched. Officials estimated that it could take up to a week to restore power to all those affected by the storms.

For this author, the recent storm also raises some important questions about the potential effects of climate change. Derecho storms, for example, are not atypical for areas affected by stifling heat waves. According to The Washington Post, “During summer, the jet stream atop a sprawling heat dome is sometimes called a 'ring of fire' due to the tendency for explosive thunderstorms to form along this weather front separating hot, humid air to the south and cooler, drier air to the north.”

One cannot help but wonder then, is Friday night’s storm the kind of event that could become more frequent and intense as a result of climate change? The Washington Post’s Capital Weather Gang appeared to wonder the same question:

As the intensity of the heat wave, without reservation, was a key factor in the destructiveness of this derecho event - it raises the question about the possible role of manmade climate warming (from elevated greenhouse concentrations). It’s a complicated, controversial question, but one that scientists will surely grapple with in case studies of this rare, extraordinary event.

The answer to that question – as difficult as it is to address – has important implications for national preparedness and community resilience to climate change. And for those that experienced this weekend’s events firsthand, it is a thought that will fester.