Of the geeky interests I pass the time with, perhaps none are as odd as my interests in reading old technical documents and outdated architecture. You can imagine the nerd-tastic joy I experienced when I discovered I could combine both those interests with my work with the natural security team, not only in the blog post to follow, but also featured in one of our upcoming reports.

While reading through the National Defense Authorization Act from this and previous years, I found that the last two have included similar requirements to examine siting nuclear reactors on military bases:

The Secretary of Defense shall submit to the congressional defense committees a report evaluating the feasibility of using military installations selected for closure under the base closure and realignment process as locations for the construction of petroleum or natural gas refineries or nuclear power plants.

Looking back into our fragmented memory hard drives, we all seemed to remember there having been a time when the DOD had dabbled in nuclear power at its facilities. With the standards for research support being set slightly higher than simply taking our word for it, I checked back to see what all was out there.

As it turns out, not only did the Department toy with the idea of nuclear power, it had an entire Army program giving it a go -- the Army Nuclear Power Program (ANPP).

The ANPP operated nine different nuclear reactors from 1952 until the program was eliminated in 1979. The sights included:

For those of you in the D.C. area, you might be surprised to see Fort Belvoir on the list. If you’re at all interested in articles of historical nerdiness, I’d recommend you take a look at this application to get Fort Belvoir’s nuclear reactor on the National Registry of Historic Places. As a preview, you can read bits of gold such as:

Despite the deterioration of its exterior walls, the interior damage caused by a leaking roof, the presence of a rear addition to the classroom section, the enclosure of the storage tanks to the rear of the vapor container, the concrete block additions to the spent fuel pit, and the rearrangement of its interior space to accommodate modern office use. . .  (page 5).

And this lovely description:

The property is not architecturally significant in style, but the steel and concrete SM-1 Plant main reactor building makes a statement of strength and containment. The Package Power Reactor and its contributing buildings lack aesthetic appeal and artistic style, but are undeniably functional and practical military buildings designed by plan (page 6).

Can you plan on us going there to take photos for our Friday feature? You better believe it. Our next full reports will also be out in a few weeks – stay tuned. 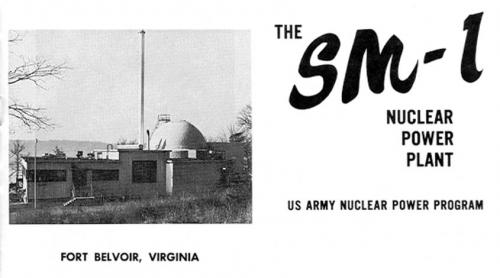