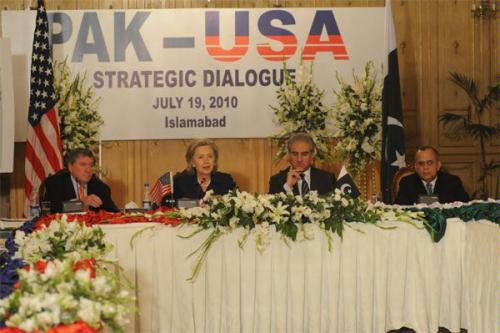 Not surprisingly, water challenges continue to exacerbate tensions between India and Pakistan. Yesterday, The New York Times reported that India, in an effort to feed the insatiable energy appetite of an economy projected to grow by 9.4 percent this fiscal year, has planned to build several hydroelectric dams over the next decade. One planned project is a hydroelectric dam on the Indian-administered side of Kashmir in an upstream valley where waters from the Himalayan glaciers eventually flow through Indian Kashmir and into Pakistan. According to the Times, “In Pakistan, the project raises fears that India, its archrival and the upriver nation, would have the power to manipulate the water flowing to its agriculture industry — a quarter of its economy and employer of half its population.”

Despite a half-century of cooperation over water in the Indus basin, increasing apprehension between India and Pakistan over those resources has added another layer of complexity to an already complex and disjointed relationship; one mired by longstanding, cultural, social and political grievances and mistrust. As the Times reported, “The fight here is adding a new layer of volatility at a critical moment to one of the most fraught relationships anywhere, one between deeply distrustful, nuclear-armed nations who have already fought three wars.”

Not for nothing, but this latest report is another reminder of the complex role that natural resources play in shaping (sometimes worsening, sometimes improving) existing social, cultural, political, ethnic or other grievances. As the Times reported, this latest water crisis is exacerbating tensions among Pakistani fundamentalists:

Anti-India nationalists and militant networks in Pakistan, already dangerously potent, have seized on the issue as a new source of rage to perpetuate 60 years of antagonism. Jamaat-u-Dawa, the charity wing of Lashkar-e-Taiba, the militant group behind the Mumbai attacks, has retooled its public relations effort around the water dispute, where it was once focused almost entirely on land claims to Kashmir. Hafiz Saeed, Jamaat’s leader, now uses the dispute in his Friday sermons to whip up fresh hatreds.

The Times report comes on the heels of Secretary of State Clinton’s two-day visit to Pakistan where she announced 270 million dollars in aid directed toward seven water initiatives. (A list of those water initiatives is available here.) In addition to the aid package, reports suggest that Islamabad had hoped to leverage Secretary Clinton’s diplomatic weight to help negotiate the most recent water issues with New Delhi. Secretary Clinton demurred:

Indeed, this is true. According to a report from our colleagues at the Wilson Center’s Asia Program, Running on Empty: Pakistan’s Water Crisis, Pakistan uses approximately 90 percent of its water for irrigation, an infrastructure often defined by its inefficiencies. According to one of the authors:

While dams, canals, barrages, and other massive engineering projects have helped establish an extraordinary irrigation system, these structures can be expensive, environmentally unfriendly, and inefficient. Instead of repeatedly building immense new structures that only create more water inefficiency, Pakistan should boost investment in repairing and maintaining existing infrastructure in order to decrease water profligacy—thereby lowering costs and safeguarding precious water supply. More emphasis should also be placed on modest, indigenous technology—such as drip irrigation. (P. 20)

Water challenges are likely to continue to shape Indo-Pakistan relations in the future. Both states are projected to experience increased water shortages as population and economic growth climb, and the impacts of climate change take hold across the region. In particular to the Himalayan glaciers that provide many of the headwaters that flow through the Indus basin, current observations suggest that climate change could significantly affect those water resources as glacial retreat becomes an increasing feature of the geographic landscape, shrinking the amount of ice and reducing the seasonal runoff of water through Kashmir and the rest of the region.

Despite the implications of water for regional security and stability, U.S. policymakers still need to be better informed on these challenges and how they could interact with existing trends throughout the region. Even Secretary Clinton noted in her recent television interview with Pakistani journalists that during her October 2009 visit to Pakistan, “Water was a constant subject that was raised with me. And before I came, I didn’t realize the seriousness. Now, of course, I do.”

As water challenges continue to unfold in South Asia, it would behoove national security policymakers broadly to better understand how natural resources are likely to continue to shape the geo-strategic environment. Add to that a need for policymakers to understand the challenges of climate change, specifically how climate change could affect the region and on what kind of timescale. Incorporating these trends into their strategic processes should allow policymakers to better plan for the future.

Photo: Secretary of State Clinton and Pakistan Foreign Minister Shah Mehmood Qureshi co-chair the U.S.-Pakistan Strategic Dialogue at the Pakistan Foreign Office in Islamabad. Courtesy of the Department of State.