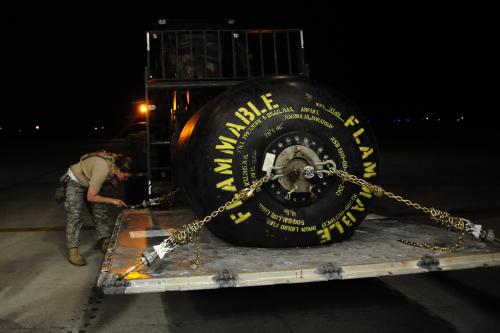 The tragedy of human suffering in the wake of the recent earthquake in Haiti generated an outpouring of public and private support (PDF). In short order the movement to the ports and airfields of Haiti began, as relief workers and multinational troops surged the western front of the Island of Hispaniola with aid.  What soon became apparent was that Haiti, already plagued by poor infrastructure, had become a logistical nightmare: Even with the influx of aid, hospitals vital to the relief effort(including those left standing and those erected in the field) have been virtually paralyzed due to an electrical grid that is in some places only temporarily functional, and in other places non-existent.

Securing adequate energy has been paramount for workers responding in Haiti, a priority driven home by Secretary of State Hillary Clinton as she declared in Port-au-Prince on January 16 that she and Haitian leaders “discussed the priorities of restoring communications, electricity and transportation.”  Without reliable access to electricity, the effectiveness of additional aid for medical treatment and recovery operations can suffer. So I decided to scan the news for indications of how energy is being provided.
Efforts to restore electricity in Haiti have been largely executed through an influx of gas-powered generators.  Engineers have already attempted to triage energy distribution, providing what they could for the most pressing needs.  In an effort to provide the fuel necessary to keep the generators running, the UN World Food Programme has shifted focus from foodstuffs to securing “an estimated 10,000 gallons, or nearly 38,000 liters, of fuel per day,” according to a recent U.S. Agency for International Development (USAID) report (PDF). However, according to that document, USAID workers soon found that the fuel feeding the generators can raise other concerns:

as additional gasoline becomes available, roads have become more congested, hampering delivery of relief items. In addition to resulting in delays, the USAID/DART notes that traffic congestion increases security concerns, necessitating trucks to increase speeds and ensure that contents are not visible.

The relief effort’s current appetite for fuel has been somewhat staved off as solar panels and other self-sustaining sources of energy find their ways onto Haitian soil amongst the mountains of food and medical supplies.

Our colleague, Commander Herb Carmen, also inquired in this recent post on Tom Ricks’s Foreign Policy blog as to whether an American naval vessel could theoretically provide energy to Haitian cities, operating as an offshore power plant.  With the arrival of the USS Carl Vinson, which boasts twin nuclear generators, a repeat of Tacoma, Washington 1929 looked to be on the way to some.  But without an adequate grid, it’s unclear how effective energy transmissions could be. Meanwhile, it seems that the aircraft carrier is using its mighty nuclear power capacity to provide another much needed liquid: fresh water.

The struggle for electricity has oddly sparked a new, though small, economic stimulus as some locals have opened up shop as electricity merchants, providing electricity to charge cell phones and other devices, including to be used by  aid workers. We’ll keep looking for ways in which Haiti is increasing and improving its ability to generate electricity and obtain and move fuel, and let us know if you hear any energy-related good news stories for the people of Haiti as well.