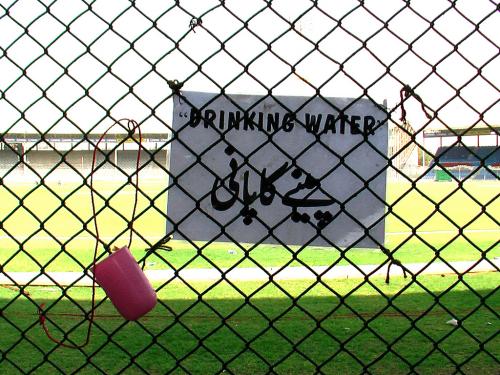 Yesterday I made the short walk from the CNAS office to the Woodrow Wilson Center to catch the Environmental Change and Security Program’s most recent event, Water, Conflict, and Cooperation: Practical Concerns for Water Development Projects. The briefing consisted of three main speakers: Jason Gehrig, a consultant and engineer for Catholic Relief Services, and author of the event’s focal piece, Water and Conflict: Incorporating Peacebuilding into Water Development; William E. Hall, a professor  in Georgetown University’s Conflict Resolution Program; and S. Tjip Walker, a team leader within the U.S. Agency for International Development’s Office of Conflict Management and Mitigation unit on Warning and Analysis.

Gehrig began the discussion with a brief outline of Water and Conflict, in which he brought to light the greatest hurdle in resolving water conflicts (complete with catchy alliteration): looking beyond the “tubes and tanks.” To be brief, Gehrig suggested that the international community look beyond the physical structures necessary to provide access to water, and rather examine the social networks that are built up around them.

As I listened to the nearly two hours of dialogue that followed, this idea of seeing past the tangible structures required for access to water proved to be at the core of each speaker’s account.  Hall’s short blur of flow charts and bar graphs on the specifics of environmental conflict resolution, for example, boiled down to social constructs which determine who uses a resource, how they use it, and other such governances.

While the event got in depth on topics of conflicts within and among villages, it missed the opportunity to discuss the implications of water, and other so-called “common-pool resources,” on the international level.  It was often alluded to, as various panelists made mention of the “or worse” scenario which might arise in the absence of resolution of smaller-scale conflicts. In one notable exception, Walker spoke of his projections for the future, specifically that water is currently a precious commodity and will only become more desirable in the future due to climatic changes.  What he seemingly urged the event’s audience to consider was the resilience for global communities to adapt in response to a changing environment, seeming to evoke the famous words of Jurassic Park’s Dr. Ian Malcolm, “life, uh. . . finds a way.”

While the crowd, which had filled the capacity of the rather large room and then some, seemed at times skeptical (vocally so at times), the general approach of tubes and tanks being constructed along with hands-on social mediation seemed to sell.  The panel, having successfully mitigated a potential ideological conflict in a room full of interested, informed and opinionated parties, seemed  to promise a hopeful outlook for the resolution of water-based conflicts.

You can watch C-SPAN’s recording of the event here.