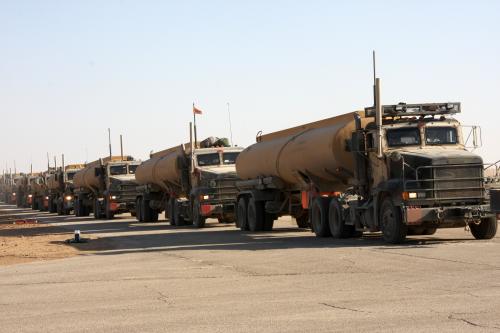 According to Lovins, DoD’s long energy logistics tail is putting the Department’s core mission at risk and it is paying for it in “blood, treasure, and lost combat effectiveness.” Fuel and fuel logistics are what has become largely understood as the “soft underbelly” of the Department of Defense. As Lovins pointed out, 1/2 of DoD personnel and 1/3 of its budget are dedicated to logistics. When the Defense Science Board was conducting its study several years ago it concluded that 1/2 of in-theater causalities were associated with convoys as well (though Lovins noted that this number does not reflect today’s total).  Lovins also pointed out that of the military’s top 10 most fuel-intensive platforms, 8 are noncombat systems. “It’s an odd way to fight a war when the water heater uses more fuel than a helicopter,” Lovins said.

Changing the way the Department thinks about fuel can be a real game changer in terms of the major war-fighting, logistics, and budget benefits. As Lovins said, reducing DoD’s fuel demand can serve as a force protector –by reducing the demand for vulnerable convoys in theater and pulling the soldiers providing security out of harm’s way – force multiplier – by freeing up soldiers attached to convoys and putting them directly into the fight – and as a force enabler – allowing platforms to remain in the battlefield for longer durations before being taken out of the fight to be refueled. Lovins also noted that shifting to more energy efficient systems can have the added benefit of unlocking transformational gains and catalyzing civilian technology transitions (not to mention saving the Department tens of billions of dollars a year).

Energy-savings technologies (such as more efficient platforms) could potentially do more to solve DoD’s energy problems than any other current solution, Lovins pointed out. Such energy-savings technologies include integrating ultralight, ultra-low-drag, ultrasafe, and advanced propulsions systems in DoD’s vehicle and air fleets. There have been incredible advancements in aerospace-grade advanced composite materials that can reduce a platform’s body frame by 2/3 of its original weight while maintaining its battlefield effectiveness (some of the materials being tested can absorb 12 times as much crash energy as steel per pound, potentially reducing casualties from improvised explosive devices).

The real clear and present danger in national and theater energy security is not oil but electrical grid vulnerabilities, Lovins warned. DoD’s fixed installations continue to depend on a highly vulnerable domestic electrical grid, while insurgents in Iraq and Afghanistan have been exploiting electrical grid vulnerabilities to undermine DoD operations. In Iraq, Lovins said, insurgents were taking down power lines as quickly as we were putting them up, blocking stabilization efforts. In fact micropower grids actually became a key counterinsurgency tactic in Iraq, he explained.

More to the point, the military’s dependence on the “big and brittle” electrical grid threatens DoD’s energy security. According to Lovins, 98 to 99 percent of U.S. outages start in the electrical grid; meanwhile our response has always been to build more power plants and power lines. The electrical grid, Lovins emphasized, is vital to run all of our other energy systems, are incredibly capital-intensive, and have very long lead times. But for Lovins, the gravest threats to our electrical grid come from cyber attacks. “I’m still surprised when I wake up in the morning and the lights are still on,” Lovins said in suggestion to a long, overdue grid failure or attack.

Lovins emphasized the need to get CONUS bases off the domestic energy grid by making them islandable microgrids. Building in this kind of resilience will help protect the military from domestic vulnerabilities in the grid system, but can also help the surrounding communities by being a backup source of electricity if the grid goes down. Already 90 percent of CONUS bases have a good supply of options onsite or nearby to generate the power they need, many with the capacity to sell energy back to the domestic grid, Lovins pointed out. In fact, according to Lovins, making CONUS bases more resilient by giving them grid independence has been DoD policy for sometime; it has just never been enforced.

There is an abundance of technology that is already being used and tested that will help the Department achieve tactical energy security and build resilience at fixed installations. Key factors such as the fully burdened cost of fuel and energy key performance parameters for new platforms are starting to be streamlined into the acquisitions and procurement process. Meanwhile the Department is continuing to organize its energy leadership. But while there is still much work to be done, DoD appears willing to take the next steps to transform its energy challenges into opportunities.

To view a copy of the PowerPoint presentation, click here (pdf). To view a video of the event, visit Wilson Center OnDemand.