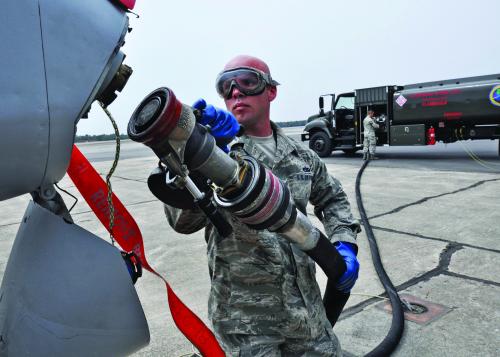 This is my favorite photo of the year – Staff Sgt. Rusty Jones fueling an A-10C Thunderbolt II with a 50/50 blend of Hydrotreated Renewable Jet and JP-8. Will found it for the cover of our September 2010 report, Fueling the Future Force: Preparing the Department of Defense for a Post-Petroleum Era. Not only is it a gorgeous photograph, but it instills in us great hope that DOD can transition its energy use and reduce its near-complete dependence on petroleum without negatively affecting our soldiers, sailors, airmen, and Marines.

If anyone out there happens to know Staff Sgt. Jones, please let him know that we’re helping to make him famous. This photo on our report cover has since circulated widely and was used for our cover story in Armed Forces Journal as well.