The Small Wars Manual (SWM), released in 1940 by the United States Marine Corps, in response to the growing engagements in guerilla style wars in Central America and Caribbean, states:

The ‘big three’ of supply are Ammunition, Food, and Water. Combat troops can operate in the field for a very limited time in actual combat with only AMMUNITION, but their continued existence requires the other two, FOOD and WATER. Therefore, in order to conduct the advance inland, one of the first considerations in such a movement must be the means of supply. 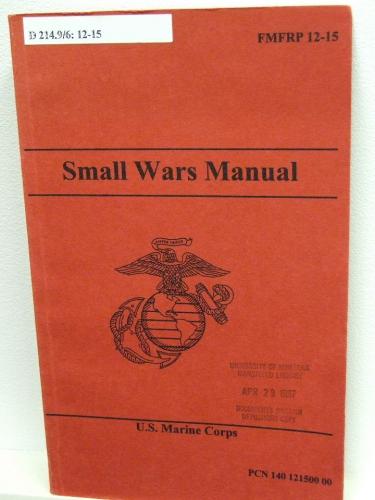 I found it interesting that fuel was not one of the “big three,” or that there is not a “big four” as no items in the supply trinity readily lend themselves to substitution.  In fact, in the 492-page document, the term “fuel” is mentioned only nine times (one of those times merely in reference to the “fuel tank” being one of the pieces of a river boat).

One has to assume that the United States understood the vital role that fuel played in war and other engagements based upon its oil sanctions against Japan in July 1940 and its complete embargo of oil exports to Japan in November 1941. Additionally, the U.S. War Department's FM 27-10: Rules of Land Warefare, issued that same year as the Small Wars Manual, hold the concealment of fuel as an act of treason, on par with espionage. Furthermore, the only permissible non-combat destruction of occupied terrirories named is "to furnish fuel if imperitively needed for the army."

In the post-Pearl Harbor world, however, fuel took on a greater presence in the U.S. field manual cacophony that erupted after Roosevelt’s declaration of war.

In a 1943 War Department study of Japanese military tactics employed on the Malaya front, it becomes apparent that to the Japanese fully understood how tactically important and potentially damaging resources (including the SWM’s “big three”) were. For example, in WWII, the Imperial Japanese Air Force (IJAF) found great success against the British Royal Air Force (RAF) simply by luring them into take off, hiding and waiting for the RAF’s engines to run low on fuel. Only then would their bomber raids commence. Beyond just fuel, the Japanese rethought their shipment methods in order to more successfully supply ammunition, water and food to the front lines and into the trenches.

Joining the blog today is Dr. Peter R. Mansoor, Colonel, U.S. Army (Ret.), author of The GI Offensive in Europe: The Triumph of American Infantry Divisions, 1941-45. Dr. Mansoor is currently the Raymond E. Mason Jr. Chair in Military History at The Ohio State University, my alma mater, where he is also a professor. After hearing his name spoken of with nothing but the utmost respect--both here in the CNAS office and in a recent, albeit snowy, OSU homecoming--I couldn’t imagine a better person to speak to for this (Field) Manual Shift. Enjoy the buckeye banter to follow.

Q:           First off, Dr. Mansoor, I’d like to thank you for your time to discuss this topic, especially after our first attempt to speak was hindered by a busy schedule and a few inches of the white stuff, originating from D.C.’s second Snowpocalypse. Is it fair to say that the Japanese forces were able to gain an initial asymmetrical advantage in WWII on the basis of their tactical approach to resources?

A:            In toasting Winston Churchill’s birthday at the Tehran Conference in November 1943, Joseph Stalin lifted his glass and proclaimed, “This is a war of engines and octanes.  I drink to the American auto industry and the American oil industry.”  Stalin was, of course, right.  Victory in World War II depended to a much greater extent on access to raw materials than previous wars.

The Japanese government clearly understood the importance of oil to their national economy; in this regard they predicated their attack on Pearl Harbor on the need to neutralize the U.S. Pacific Fleet in order to prevent its interference with the Japanese conquest of the resource-rich Netherlands East Indies.  Although Japan’s initial campaigns were successful, by late 1944 its economy was starved for resources due to the increasingly successful American submarine war against Japanese shipping.  Fuel, ammunition, and food ran short as Japanese forces fought ferociously to stave off defeat.  In the end, however, the Japanese were “ground to powder,” in the prophetic words of Winston Churchill after hearing of the attack on Pearl Harbor.

At the tactical level, the advantage gained by Japanese forces early in the Pacific War was variable at best.  They generally operated on shoestring logistics and relied heavily on the capabilities of their well trained infantry to out-maneuver and out-fight their enemies in ground combat.  U.S. and Filipino forces, under siege in the Bataan Peninsula, eventually had to surrender due to lack of supplies to sustain their defensive efforts.   The U.S. Navy had a decided advantage in operating across the vast expanse of the Pacific Ocean given that it had built a fleet train and learned how to replenish its ships underway in the 1930s.  Later, the island-hopping campaign was aimed at gaining air fields and anchorages for U.S. airpower and seapower.  British Commonwealth forces in the Burma Theater learned how to coordinate aerial resupply to provide the means for their infantry divisions to operate at extended distances away from ground transport support.  So whatever tactical advantages that Japanese forces enjoyed early in the war had dissipated by the time the Allies began their great counteroffensive to destroy the Imperial Japanese Empire.

Q:           The SWM doesn’t really mention fuel. Is this indicative of the types of wars the United States had expected itself to be engaged in at that time – short lived and un-mechanized?

A:            The Small Wars Manual was a product of the Marine experience in the Caribbean and Central America in the first three decades of the 20th century.  Marine forces were largely infantry-based, supported by a few aircraft but otherwise with minimal motorized support.  In the wars the manual addresses, fuel was not a consideration.  Remember that the manual was not a blueprint for fighting an industrial war.  For a glimpse into Marine doctrine in that regard, read the Tentative Manual for Landing Operations, produced by the Marine Corps in 1934.

Q:           In my research, I have been hard-pressed to locate U.S. field manuals in the few years before the Pearl Harbor attacks.  The Small Wars Manual, building upon the short 1921 report “The Strategy and Tactics of Small Wars”, stands out as one of the few pieces of U.S. strategic military literature predating America’s entrance into WWII. The U.S. military today, by contrast, is considered a military heavily dependent on published doctrine. What changed?

A:            The U.S. military wrote doctrinal manuals in the interwar period, but not a lot of them.  The U.S. Army distilled its World War I experiences in a new Field Service Regulations published in 1923.  The Army updated this manual in 1939, but as Bill Odom points out in his book After the Trenches, the shortage of resources also caused military thought to stagnate somewhat due to lack of extensive experimentation and experience in the use of new concepts and formations, so the Army quickly had to generate new doctrine as it mobilized to fight World War II.  The Marines produced both the Small Wars Manual and doctrine for amphibious operations, which would prove extremely useful in the Pacific War.  The Air Force produced doctrine for strategic bombing.  Nevertheless, the U.S. military did not produce the volume of doctrine that it does today.  The big change in this regard was the creation of the U.S. Army Training and Doctrine Command in 1973, followed by similar organizations in other services.  With an institutional home, doctrine writers became much more prolific in the succeeding decades.

Q:           FM 3-24, Operations, was published in response to operational difficulties in Iraq and Afghanistan encountered by U.S. combat units. Was there a similar doctrinal response to the centrality of fuel and resources during the Second World War?

A:            Doctrine lagged behind field experience in World War II.  The Victory Plan of 1941, for instance, called for an 8 million man Army (both ground and air forces) with a total of 213 divisions and 195 air groups.  By the end of the war the U.S. Army had the 8 million men, but only 89 divisions.  The planners had seriously underestimated the logistical needs of modern motorized and mechanized forces, and commanders had to create from scratch the numerous logistical organizations to sustain these forces in theaters around the world.  Most commanders ended up taking soldiers “out of hide” to augment their logistical units, despite the lack of doctrinal support from the institutional Army.

Q:           Is there any doctrine, past or present, American or otherwise, that you feel adequately addresses so-called “natural security” concerns in either logistics or maneuver operations?

My sincere thanks to Dr. Mansoor for joining us on the blog to look back at natural security, circa 1940. Good food for thought for today’s logistics issues and beyond.