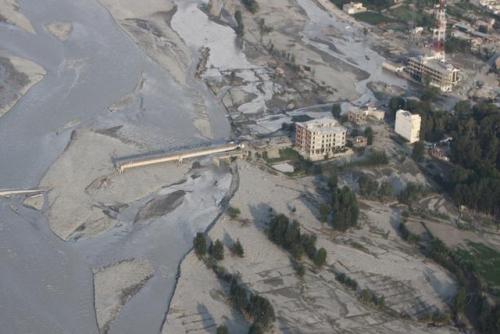 If there’s one thing that I’ve learned in my time at CNAS working with the Natural Security team, it’s that climate events and natural disasters around the world (along with issues of natural resources, bio-diversity and energy resources) are having an increasingly important impact on US national security issues.  The floods in Pakistan are a prime example of one of these issues that defies the traditional boundaries of security studies, and provides an example of the ways that traditional conceptions of what constitutes a threat to the United States will have to evolve to match the increasingly tangled and complex nature and overwhelming scope of these new issues.

We’ve been following the story of the floods in our news and posts, but it’s worth reviewing the extent of the damage, which seems to expand exponentially day by day.  As floods continue to sweep south, the UN estimates that about 17 million people have been affected by the floods, and about 1.2 million homes have been destroyed.  Authorities are organizing mass evacuations of 200,000 people in the Thatta area of Sindh province, but these evacuations have come too late for many.  The UN also requested 40 more helicopters from the international community on Tuesday, noting that more than 800,000 people were isolated by the flooding and could only be reached with aid by air.  Conditions are now ripe for the spread of water-borne and potentially epidemic disease, such as cholera, diarrhoea and dysentery. The huge numbers are hard to properly digest, but for context, according to CARE, “this disaster has surpassed the number of people affected by the 2005 South Asia tsunami, the 2005 South Asia earthquake and the 2010 Haiti earthquake combined.”

Of course Americans should be compelled to help alleviate this dire situation for moral reasons, but there is no dearth of selfish ones as well that should compel us to act.  The floods are already having a direct impact on US security interests: The New York Times reports that floods have disrupted the main supply lines for NATO and US forces in Afghanistan, as both of the main routes from Karachi to Afghanistan that carry the bulk of US military supplies, including fuel for US bases in the south of Afghanistan, have been cut off.

But the danger to US interests is also more long-term. As Christine said recently on NPR, “just based on our troops in the region, our goals in the region, our work with allies like India in the region — anything that destabilizes Pakistan or affects its government's ability to keep control of the country has enormous stakes for the United States on the security side.”

A Pew poll from July 2010 found that “the image of the United States remains overwhelmingly negative in Pakistan.”  Fewer than 17 percent of Pakistanis have a favourable opinion of the United States, and 56 percent oppose US-led efforts to fight terrorism there.  More worryingly, 84 percent of Pakistanis consider China a partner of their country and 85 percent have a favourable opinion of China.

Thus, many in the US government argue that the damage from the floods also presents an opportunity for the United States by giving it an opportunity to increase Pakistani opinions of partnership with the United States and US efforts to defeat terrorism there.  The Pew poll found that 26 percent of Pakistanis believe that the United States gives Pakistan hardly any aid money, and 22 percent say that the US gives only a little.  Furthermore, of those who responded that the US gives at least some assistance to Pakistan, “about an equal number say US aid is mostly for military purposes as say it is mostly for economic development or for both equally.”  So far, the United States has pledged aid worth 90 million dollars and deployed 18 army helicopters for humanitarian assistance.  The intent of this aid is presumably not only to assist the people of Pakistan through a crisis but also to demonstrate US support for Pakistanis.  Administrator Dr. Rajiv Shah recently wrote on USAID’s blog that “the United States intends to show itself as a friend and committed partner of Pakistan for many years to come.

Ironically, there’s also a danger that US aid could contribute to long-term instability by highlighting the fact that the Pakistani government has been unable or unwilling to respond to the fallout of the floods in a proportionate way.  President Zardari’s trip to the UK at the beginning of the monsoon flooding  only seemed to highlight the government’s seeming indifference to the plight of ordinary Pakistanis, even as Islamist charities began to fill the humanitarian aid vacuum left by the government.

For me, this dilemma and the many other complex issues that accompany the flood highlights why it is so important for government officials, academics and other policymakers to study natural security issues now, so that when catastrophic natural disasters and conflicts over dwindling natural resources do pose a threat to US national security, as well as the quality of life of billions globally, as they will all too often in the future, US policymakers will be prepared.