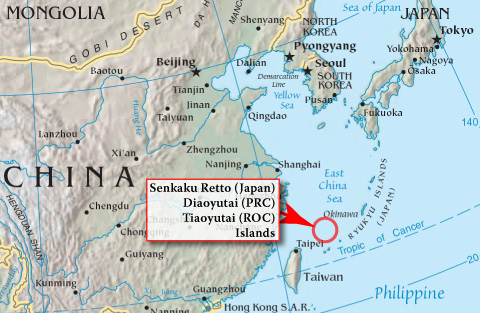 Tensions are on the rise in the East China Sea, with recent events embroiling states with long-standing mistrust: China and Japan. Recall that back in July we reported here on the blog about U.S. Secretary of State Hillary Clinton’s statement that the United States had a “nation interest” in freedom of navigation and open access of the maritime commons in the South China Sea. Secretary Clinton’s insistence prompted a strong rebuke by Beijing that essentially put the United States on notice by warning that U.S. interference “would increase regional tensions.” The recent events in the South China Sea, including Secretary Clinton’s remarks and, more recently, China’s dispatch of a submersible to the bottom of the South China Sea – a frontier 2 miles below the ocean surface, has prompted anxiety over China’s increasing claims to the contested ocean and island territories to its East.

Most recently, a two week standoff between China and Japan that began with the arrest of a Chinese trawler captain by the Japanese Coast Guard has led to rising tensions between the two Asian giants. According to a report by The New York Times on Sunday, the arrest “took place in waters near uninhabited islands claimed by both countries,” close to Taiwan in the East China Sea. Since the arrests, tensions have escalated, with China on Sunday announcing that it “had suspended high-level exchanges with Japan, and threatened additional ‘strong countermeasures,’ after Tokyo said it would extend its detention of the captain.” Meanwhile, Reuters reported this morning that a Chinese Foreign Ministry spokeswoman said that Chinese Premier Wen Jiabao and Japanese Prime Minister Naoto Kan are not likely to meet in New York this week on the sidelines of the United Nations meeting: “Given the current atmosphere, arranging a meeting clearly would be inappropriate,” the spokeswoman said.

Agence France Press reported on September 7 that the incident began with what Japanese officials claimed as illegal fishing by the Chinese-flagged trawler. The captain of the fishing trawler was arrested for “obstructing officers on duty” and colliding with two Japanese Coast Guard vessels near the islands, according to The New York Times report on Sunday.

But could these tensions have more to do with access to resources than anything else? As Reuters reported this morning:

The two countries [China and Japan] are at odds over China's exploration for natural gas in the East China Sea, while Beijing is also involved in territorial disputes with Southeast Asian nations in the South China Sea over an area rich in energy and key to shipping.

The East and South China Sea is said to contain much of the region’s energy supplies – including enormous deposits of oil and natural gas. With so much on the line with access to these resources, tensions have been notably sharp recently, particularly around cooperation to develop these resources. According to the Sunday Times, “Japan has complained about signs that China could begin drilling for natural gas in another contested area of the East China Sea, which would violate an agreement between the two nations to develop the area jointly.”

Some experts have suggested that the recent standoff between China and Japan has more to do with Japan hedging against its relative decline in power and China’s rise as a strong regional player than anything else. As the Times reported:

Chinese analysts said that China’s leaders have concluded that Japan is trying to set an example. ‘Japan is trying to get China to eat the bitter fruit’ of its sovereignty over the islands, said Wang Xiangsui, director of the Center for Security Strategy at the Beijing University of Aeronautics and Astronautics. ‘They want China to accept the fact that they control the islands.’

With resource issues clearly a consideration, it make sense that Tokyo would be doing what it can to rebuff Beijing’s attempt to dominate claims to the regions disputed territory. Both China and Japan, Asia’s two economic giants, have a vested interest in claims to the disputed territory, including what could be much of the region’s minerals, oil and natural gas. But as Washington and Tokyo strengthen their diplomatic and security ties, what could these recent events do to relations between Beijing and Washington? With Secretary Clinton already laying a marker with her claim that the United States has a “national interest” in ensuring open access to the South China Sea, just where will Washington come down in this dispute – a dispute that seems to be grabbing more headlines and attention, and getting more complex by the day?

Photo: A map of the disputed islands, known in China as Diaoyu and in Japan as Senkaku. Courtesy of Wikimedia.