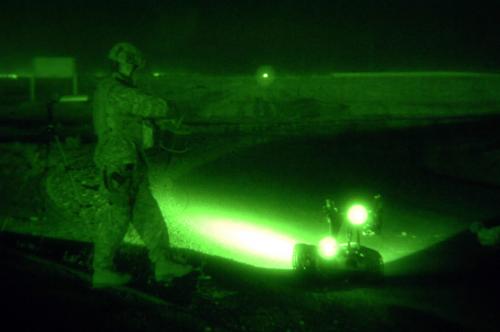 Whether it’s the next generation of the PackBot, MedBot or Predator drone, there is little doubt that military robotics will grow exponentially over the next several decades as DOD shapes a new era of modern warfare, as Peter Singer writes in Wired for War: The Robotics Revolution and Conflict in the 21st Century. And if the systems deployed in Iraq and Afghanistan are any indicator, Singer’s science fiction battlefield is fast becoming a battlefield reality.

But with the rapid development of artificial intelligence-based military systems (not to mention new investments in clean energy technology and a more sophisticated telecommunications infrastructure), the United States is increasing its dependence on globally scarce minerals. And though supply shocks, shortage trends, and the complete unavailability of strategic minerals are concerns, the greater worry should be that when it comes to our reliance on critical and strategic minerals to meet our current and future needs, we don’t quite know what we’ll need, when we’ll need it, or if we’ll have it.

Congress was somewhat forward-looking when it established the National Defense Stockpile (NDS) in 1939; its sole task is to “acquire and store metals, minerals and agricultural supplies,” essential to U.S. economic and national security. But today, technological developments – robotics and otherwise – and long-term DOD procurement cycles have complicated the ability of the NDS to effectively anticipate material needs. According to a 2008 National Academies of Science report, the “NDS is disconnected from actual national defense materials needs in the twenty-first century and from national defense strategies and operational priorities.” DOD recognized this in the early 1990s, but rather than reassess and restock the NDS to meet current and future U.S. material needs, 99 percent of the excess stockpile – an antiquated stock of yesteryear’s materials demands, such as copper – has been continually sold since 1993.

There are a few signs that such policies are in line for improvement. In a recent report to Congress, DOD’s Working Group on Strategic Minerals Availability recommended transforming the NDS into a new Strategic Materials Security Program (SMSP) that would have more flexibility and would “enable the Nation to more quickly adapt to current world market conditions and ensure the future availability of materials required for defense and national security needs.” It also identified 13 minerals for which DOD could experience vulnerability, and should suspend or limit selling these materials until a further study can be conducted (for a complete list, see A-1 below). Among the minerals identified are chromium metal, cobalt, ferrochrome and ferromanganese, which will likely be essential to future defense projects, including Singer’s robotic warriors.

One of the more interesting, and potentially sensitive, recommendations coming from the report was the need to further study foreign countries’ stockpiling of strategic resources, as well. As China, India and other emerging powers enter the world stage, their appetite for shared resources will continue to grow, as well, and could come in direct competition with the United States. China, the report finds, “is a major producer of many of the materials for which the United States is heavily import reliant” already, including rare earth metals used in most high-tech equipment. China is also the single largest consumer of natural rubber, which DOD ranked as the sixth most important annually consumed material.

As the report notes, “a stable source of funding to support the broadened mission of the SMSP,” will be crucial for successfully retooling DOD and the NDS. But given the current economic crisis and the apparent lack of urgency (due to the lack of knowledge of related supply issues) such funding may be difficult to get. Even the current House draft of the 2010 National Defense Authorization Act (which passed in the House on Friday) fails to authorize funding for reconfiguring the NDS; though it does have a requirement for a report from the SecDef within 180 days of the legislation’s passage outlining any action DOD plans to take to reconfigure the NDS.

The bottom line: DOD is toeing a dangerous line by defining future needs without understanding future availability. If DOD continues to define and shape the next generation of warfare with tech-intensive defense systems, it needs to make sure the material resources will be available to deliver on those systems.

Photo: A U.S. Army soldier uses a PackBot to survey an area with suspected Improvised Explosive Devices (IEDs).Courtesy of SPC Charles Gill and the U.S. Department of Defense.

Reconfiguration of the National Defense Stockpile Report to Congress