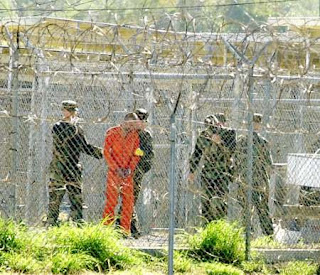 A Kuwaiti man who complained about maltreatment during a three-year stay in the U.S. detention facility in Guantanamo Bay, Cuba, was involved in a deadly suicide bombing in northern Iraq last month, the U.S. military confirmed yesterday.

Abdallah Salih al-Ajmi, 29, whom the U.S. military accused of fighting with the Taliban in Afghanistan and wanting to kill Americans, was involved in one of three suicide bombings that killed seven Iraqi security forces in Mosul on April 26, Defense Department officials said.

Dr. iRack is sure there will be a chicken-or-the-egg debate triggered by this incident. Was this guy one of the "worst of the worst" before he got to Gitmo, as Rumsfeld would say, and therefore never should have been released, or did his treatment at Gitmo make him this way? Either way, as the next administration, Republican or Democrat, moves to shut Gitmo down, the United States and the world will have to figure out what to do with these guys.