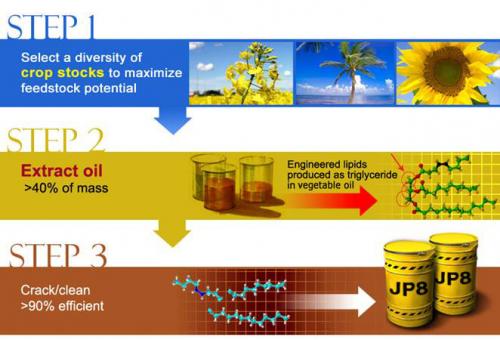 “Energy has always been an important point in the military,” said Dr. Barbara McQuiston, special assistant for energy at the Defense Advanced Research Projects Agency (DARPA), in an October 6, 2009, interview with Armed with Science – a Department of Defense webcast. “You can go back to history and look at fodder to feed the horses in the Napoleonic wars; and you can look at today, all the way to Afghanistan where energy is a key enabler and, at times, a key limitation.”

Scientists at DARPA are working with multiple private sector partners on energy technologies that could have a “real game-changing nature [for] the future,” McQuiston said. In particular, DARPA scientists have a robust portfolio that includes programs in “energy creation, energy conversions, and energy control” aimed at improving tactical energy independence by shrinking the long logistics tail of forward deployed military units in countries like Afghanistan.

“When you're in the field, in places like Afghanistan, all your energy has to be brought in right now,” McQuiston explained. In fact, fuel convoys have become increasingly vulnerable to attack, raising serious operational concerns for military logisticians in theater. According to a recent report in Time magazine, from June to October, attacks against NATO supply convoys destroyed 123 trucks and killed 145 truck drivers and guards. On top of that, according to a NATO logistics officer who spoke with Time, “the militants now have the capacity to launch ambushes on supply routes year round.”

“What we [DARPA] think about is what sort of technology could you have to make yourself tactically independent so that you could generate energy from where you are?” McQuiston said. Reducing the number of fuel convoys needed to supply forward deployed troops has already become a more widespread concern in the Department. The Army has established a goal of significantly reducing its fuel shipments to forward deployed troops to just once a month instead of once every few weeks, while the Marine Corps recently deployed a team to Afghanistan to conduct its own energy assessment.

Scientists at DARPA are making these investments in technologies that could also help the Air Force meet its legislative requirement to have fleet-wide certification of a 50/50 blend of jet fuel from synthetic and conventional sources by 2016. For example, scientists at DARPA are making high-risk/high-reward investments to develop state of the art technology that can use a variety of sources/materials to create JP8 jet fuel, including sources like nonfood oils and, of course, algae, which has been a mainstream headline recently. They are even looking into using “black tar,” a waste byproduct from the paper industry, as a source for jet fuel.

“If you looked, again, at Afghanistan,” McQuiston said, and could “create jet fuel from indigenous sources, and rely on that, you'd not only be able to source energy for our military, but you'd be able to leave an infrastructure that would be more sustainable for the country.“

Of course DARPA is looking over the horizon and making investments in long-term technological development too. Its programs include improving the efficiency of solar photovoltaic cells to 50 percent from today’s cells, up from 12 to 15 percent today, for example.  Suffice it to say though that those at DARPA have their work cut out for them. But from the scientists who brought us the Internet and GPS, nothing is too hard; it is just “DARPA hard.”

Click here to read more about DARPA’s energy programs. You can also read the complete transcript from the interview with Dr. Barbara McQuiston here.

Photo: Scientists at DARPA are working on a variety of energy conversion programs to produce JP8 jet fuel from multiple sources. Courtesy of DARPA and the Department of Defense.