Daveed Gartenstein-Ross is a senior fellow at the Foundation for Defense of Democracies, and a Ph.D. candidate in world politics at the Catholic University of America. He is the author or volume editor of eleven books and monographs, including Bin Laden’s Legacy: Why We’re Still Losing the War on Terror. Chris Albon earned a Ph.D. in political science from the University of California at Davis.

In late September, African Union (AU) forces surrounded the port city of Kismayo on Somalia’s southern coast. The AU troops stood on the threshold of capturing the city from the al Qaeda-affiliated militant group al Shabaab, which began the year as the dominant military power in southern Somalia. On October 2, when AU troops entered Kismayo and claimed control of the city after a long standoff, Shabaab had lost its final stronghold.

It is worth noting, though, that the AU troops were hit by a bomb blast as they entered, which was Shabaab’s way of saying that it was still a force to be reckoned with. As the group’s spokesman Sheikh Abdiasis Abu Musab said, “This is only an introduction to the forthcoming explosions.” As one of us noted at the time, in Foreign Policy, with the loss of Kismayo Shabaab was returning to somewhat familiar territory:

Al-Shabab will try to repeat a maneuver that already proved successful once before in Somalia. Back in 2006, an Islamist coalition called the Islamic Courts Union (ICU), of which al-Shabab is an offshoot, controlled most of the key strategic points in southern Somalia and had encircled the U.N.-recognized Transitional Federal Government in the south-central city of Baidoa. The ICU governed according to its strict interpretation of Islamic law. It executed people for watching soccer matches and imposed a number of other draconian restrictions (though wasn’t as harsh as al-Shabab would later become). As the year neared its end, many observers expected the ICU to undertake an offensive to wipe out the transitional government’s final sanctuary. Instead, however, Ethiopia launched an invasion of Somalia that not only received the approval of the United States, but critical military support as well. Ethiopian troops entered the capital, Mogadishu, on Dec. 28, 2006, and quickly reversed virtually all the ICU’s strategic gains throughout the country before the end of January 2007.

The ICU promised an insurgency, and one soon gripped Somalia. Al-Shabab split from the ICU during this period and eventually was able to become the dominant force in the country’s south. By early 2011, the situation looked much like it did prior to the Ethiopian invasion. Just as a few Ethiopian troops protected the transitional government in Baidoa in 2006, all that stood between the Somali government and certain death at al-Shabab’s hands in 2011 was the protection of an African Union force composed of Ugandan and Burundian troops.

Although Shabaab has now lost Kismayo, it is hoping for a repeat of what occurred from 2007 through 2011: that the country’s transitional government requires a foreign force to prop it up, which serves as an irritant and gives rise to a powerful insurgency. Whether they are able to do so, of course, remains to be seen.

Since African Union forces surrounded Kismayo, we have kept a database detailing every publicly-reported attack known or suspected of being carried out by the group and its sympathizers. This database runs from September 30, 2012, through December 5, 2012, covering a total of 68 attacks. In this article, we map the early part of Shabaab’s attempted post-Kismayo insurgency by providing a visualization of this data.

Overall, by our count 144 people have been killed in these attacks and 300 wounded. See Figure One for casualties caused by these attacks. 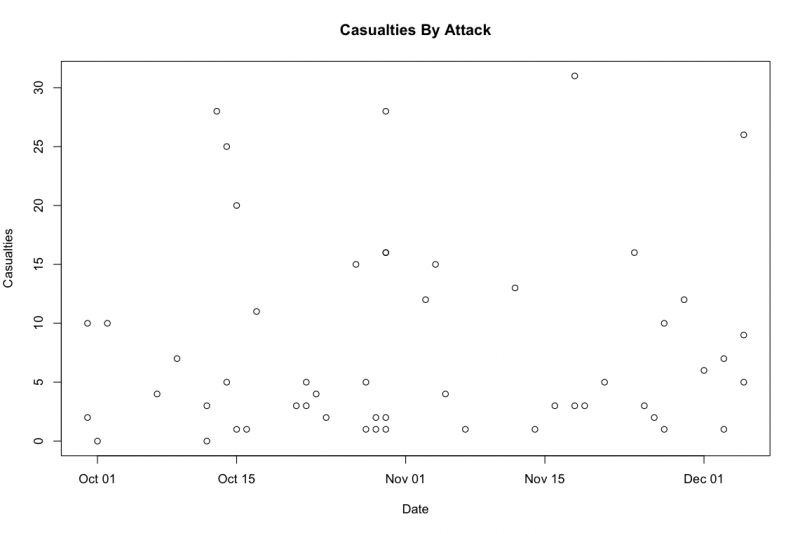 Further breaking down these figures, 125 were killed in Somalia and 19 in Kenya; 227 were wounded in Somalia, and 73 in Kenya. Our figures almost certainly underestimate the overall numbers of killed and wounded in Shabaab-related attacks (though perhaps not in Kenya, as we will explain subsequently), since we measure only attacks that were reported in the press. Not only do some attacks in Somalia go unreported, but also in many cases the press reporting did not include numbers of killed or wounded, and thus we could not add concrete numbers to our database.

For example, on September 30, AFP reported on a grenade attack at a Nairobi church that killed a child and wounded nine other people. The article noted that the blast, which triggered reprisal attacks against Somalis, “came a day after Islamist Shebab fighters abandoned their last bastion in neighbouring Somalia in the face of an assault by Kenyan and other troops.” AFP reported the statement of Wilfred Mbithi, head of police operations in Nairobi, that witnesses “saw two men of Somali origin running towards the back of the church where the explosion occurred.” The article further notes:

No one has yet claimed responsibility for the church attack, the latest in a string of grenade attacks, shootings and bomb blasts that have rocked Kenya since it sent troops into southern Somalia in October 2011 to crush bases of Al-Qaeda-linked Shebab fighters.

On Saturday, the Shebab retreated from their last stronghold in Somalia, leaving the southern port city of Kismayo that has been a vital economic lifeline for the Islamists.

Shebab spokesman Ali Mohamud Rage had warned that the militia would remain a threat.

All of this means that the article is strongly implying that Shabaab sympathizers are the likely perpetrators of the attack; but without a claim of responsibility, that cannot be known for sure.

Figure One makes clear that there is no discernible trend in terms of casualties caused by Shabaab attacks: they cannot be shown to be either increasing or decreasing over time.

We also measured attacks by target in Figure Two. 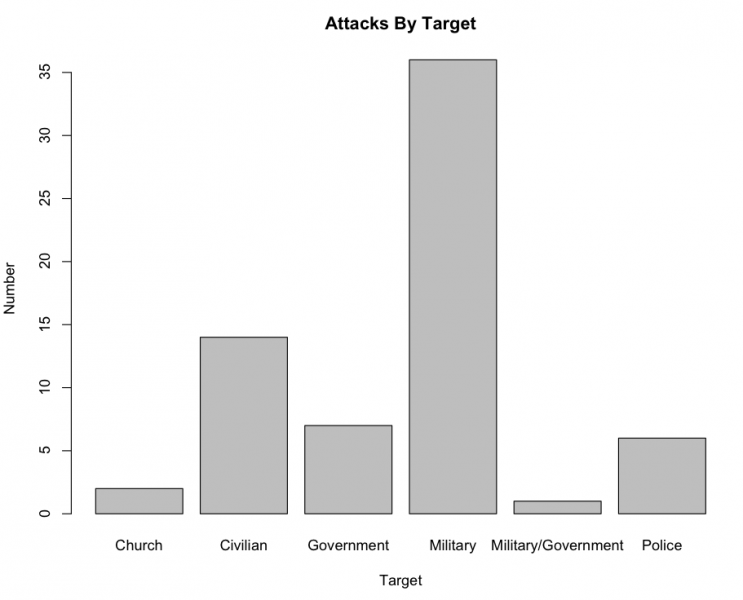 The overwhelming majority of attacks were against military targets. These include attacks against AU, Kenyan, and Somali forces. Civilians were the second most popular target, followed by government and police. There were also two attacks on churches, both of which occurred in Kenya (in Nairobi and Garissa), and both of which employed grenades.

We measured attacks by type in Figure Three.

The three most popular attack types by Shabaab and its sympathizers were IED attacks, ambushes, and shootings. Shabaab has also prominently employed grenade attacks, assassinations, and massed attacks. Only one suicide attack was found in this sample, a double suicide bombing at a Mogadishu restaurant in early November. However, there were also unconfirmed reports that pro-government forces captured a would-be female suicide bomber in late October as she was on her way to carry out an attack at “a busy location in Kismayo.”

We will continue to monitor the shape of Shabaab’s post-Kismayo fight against Somalia’s government, and may publish an update at some future point.