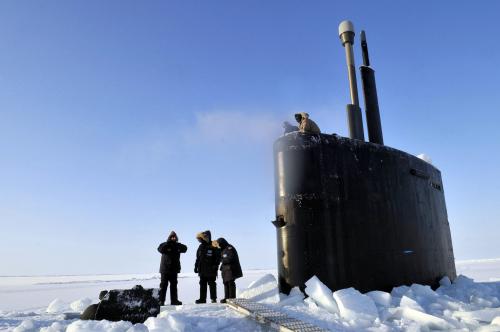 On Tuesday, CNAS Vice President for Natural Security Sharon Burke spoke with NPR’s On Point with Tom Ashbrook where she discussed, among other issues, the Department of Defense’s (DoD) planning concerning climate change scenarios. One of the issues discussed was the notion that – at least short-term – climate change will not affect all nations equally. Initially there will be some winners and losers, Burke told Ashbrook. The losers are fairly easy to discern. Take for instance those countries that will be swallowed up by a rising sea – à la the Maldives or Tuvalu.

However, as the National Intelligence Council report Global Trends 2025: A Transformed World states, Arctic nations in particular stand to make immediate gains as climate change continues to shrink the area covered by Arctic sea ice. As sea ice retreats, the possibility of the Arctic becoming a viable shipping route will become more likely. If the ice retreats enough to allow for near-year or yearlong transit, the melting Arctic may become a desirable alternative to the gamut of Panamax restrictions and piracy that shipping companies currently face, potentially generating windfall profits for Russian and Canadian ports servicing the route.

Arctic nations also stand to gain access to significant reserves of natural resources from the melting Arctic. Last year, the United States Geological Survey (USGS) estimated reserves of undiscovered conventional oil and natural gas in the Arctic in its Circum-Arctic Resource Appraisal. Science Magazine and Nature Magazine both examined where exactly deposits existed vis-à-vis national borders. They concluded that Russia in particular stands to be a big winner, with the South Kara Sea representing the largest basin of undiscovered natural gas.

With conventional oil, Alaska was singled out as a holding the largest concentration of undiscovered resources. How much, of course, is unclear– that is the problem with undiscovered deposits; no one is exactly sure how much there is, but estimates in the Arctic range from 22 to 256 billion barrels per year, with a mean around 90 billion.

Talk of increased competition over Arctic resources may leave some concerned that such competition will spark war between competing nations; and it is important not to discount this possibility either. However, the USGS data serves as a nice reminder that the evolution of such conflicts is likely to be gradual. According to the USGS, the majority of the Arctic resources are located on continental shelves, so rights to these resources are pretty clear-cut. Furthermore, sea ice does not disappear all at once – it retreats steadily towards the North Pole, and only the areas it is retreating from will become available for exploitation.

Blatant competition resulting in heightened tension will be slow onset and will most likely result when sea ice has retreated to a point where resources beyond continental shelves are available and nations begin bumping into each other’s drilling operations or companies start engaging in suspect cross-border directional drilling operations. Even then conflict is less likely if the Arctic Council can successfully adjudicate grievances.

Last week I interviewed CNAS Senior Fellow Robert Kaplan who made one particularly interesting comment about population growth triggering conflict, noting that “with population growth – nobody holds up a sign in an African country and says ‘now we’ve reached 10 million, let’s have a war.’” The same argument may hold true for Arctic resources.

It is extremely unlikely that we will see a spontaneous war break out over the Arctic. Instead a variety of nations will slowly advance over territory towards a center point and begin to cohabitate and compete over a shrinking area. In a nutshell, this is the sort of issue that the Pentagon should be studying and preparing for – part of DoD’s job is to study emerging threats and prepare for them well in advance.

Finally, while some Arctic nations will see benefits from climate change, they will have to adapt to some insidious consequences of a melting Arctic as well. For example, Alaska may gain access to significant oil reserves, but it is also going to feel the impacts from spruce beetle infestations, wildfires, droughts, and coastal storms. Likewise, climate change will grant Russia access to natural gas, but a recent World Bank reports that given its current preparedness level, it is also going to wreak havoc on the country’s infrastructure. When examining issues related to Arctic resource competition, it is important to keep things in perspective. With a melting Arctic there will be benefits for some states, but the impacts will be felt across the board and it is likely that all states will suffer from the consequences one way or another.