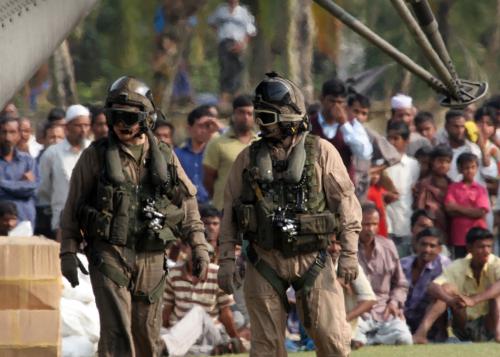 “If you had to pick a place that would be the mother of all humanitarian emergencies over the next 20 years, the Navy and Air Force might focus on Bangladesh,” said Robert Kaplan, CNAS senior fellow and correspondent with The Atlantic Monthly, at the April 29, 2010 event, Natural Security: Navigating the Future Global Environment. “And you know, Bangladesh you laugh about because there’s always trouble in Bangladesh, but Bangladesh has 150 million people. That’s more than the population of Russia.”

As the national security community continues to shift from studying to responding to climate change, understanding where climate changes will be most acute will be critical for the United States – and in particular the U.S. armed forces – to prepare for future challenges, such as an increase in humanitarian and disaster relief missions. “We’re facing some immense humanitarian catastrophes in the future that we’re seeing the militarization of humanitarian relief because only navies and air forces have the lift capacity to get fresh water and supplies to many of these littoral areas,” said Kaplan.

In Bangladesh, sea level rise is likely to be one of the most significant climate challenges. According to Nature, “Nearly the entire country is a vast, flat delta, where even a modest climb in the height of the Bay of Bengal could push water deep inland if it weren't for the protective barriers along the coast.” Unfortunately, climate change is also assaulting those protective barriers – principally the mangrove trees that protect coastal communities from surging tides and fierce storms. “These mangroves survive only in a slightly salty zone, where there's a delicate balance between encroachment of the saline tides and fresh water flowing down through the forest's rivers,” reports Nature. Rising seas alter the salinity of the water where mangroves grow, making the environment more saline – and more inhospitable to mangrove growth.

Beyond damaging or destroying natural coastal defenses, sea level rise could disrupt local livelihoods by exacerbating food insecurity. In particular, the Sundarbans – the world’s largest single tract of mangroves and one of the great biodiversity hotspots (home to the last few endangered Bengal tigers) – is likely to disappear, devastating the local communities that rely on the fish and shrimp nurseries that are sustained within this mangrove forest. Meanwhile, as sea level continues to rise – as is expected due to climate change – Bangladesh’s soil could become increasingly saline, making agricultural development an even greater hurdle than it is today; and not just along the coast, but far-reaching throughout the country. “Salinization is basically the face that global warming wears in the Indian subcontinent because it drives warm water inland and it leads to more salinated soils which hurts growth, it closes down rice paddies,” Robert Kaplan said. Even now it’s already “too salty for traditional crops,” Bangladeshi farmers told Nature in 2009.

As Bangladesh struggles to adapt to these future challenges, the U.S. Navy and Air Force may have to play a role in assuaging the crises that arise in order to maintain stability in a country already ranked critically near state failure, according to the 2009 Failed States Index. Already, Bangladesh’s environmental challenges are, in part, driving migrants into neighboring India. In fact, India – which will likely be plagued by its own climate change challenges – faces a potential surge of Bangladeshi migrants fleeing the effects of climate change, and Indian officials are acutely aware of this.

Over the years, Indian officials have expressed concerns over the knock-on effects from the “Bangladeshization” of the Indian states of Assam and Tripura where ethnic tensions are already sharp between the illegal Bangladeshi migrants who have flocked to these states in search of work and wellbeing and the local Indians. According to The New York Times, “Though there are no official figures of actual numbers of Bangladeshis in Assam, locals say their population could be six million of the state's 26 million people.” And while India has built a 2,500-mile fence to deter illegal immigration, the effects of climate change could undermine that deterrence as Bangladeshis are forced to move from a land literally sinking beneath them.

As the effects of climate change come to pass, there will be clear challenges for Bangladesh; but there are opportunities as well. Cooperating with Bangladesh through development and other climate change adaptation efforts such professional training, building dikes and improving other coastal defenses are opportunities that could help bolster the country’s resilience to and dampen the impact of climate change, all the while developing the toolkit necessary to meet near-term development goals.

These are efforts that could be done today, using a whole-of-government approach that leverages the competencies of not only the U.S. military, but the State Department, the U.S. Agency for International Development, the U.S. Department of Agriculture and other relevant interagency partners. For the United States, efforts taken today could help reduce our future commitment to the country by increasing the Bangladeshis’ capacity to respond to their own humanitarian disasters (at least some of them). At the same time, such efforts could serve U.S. interests by bolstering our diplomatic footing with India, who would presumably benefit from these efforts as well, as fewer Bangladeshis are forced to migrate due to climate change. This could be of particular interest to the Obama administration, which is looking for opportunities to strengthen the U.S.-India relationship.