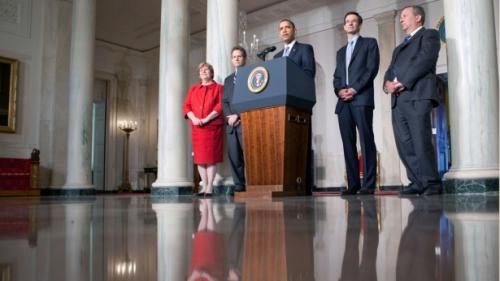 The President released his Fiscal Year (FY) 2011 budget yesterday alongside the 2010 Quadrennial Defense Review (QDR). (For a solid analysis on the budget and the QDR, check out my colleague and officemate Travis Sharp’s policy brief, Vision Meets Reality: 2010 QDR and 2011 Defense Budget.)

In last week’s State of the Union Address, President Obama’s message centered on the economy and creating new jobs in 2010. The president pointed specifically to fostering a new energy economy with investments in clean energy infrastructure and energy efficiency and innovation – investments that would generate new jobs for Americans while reducing our dependence on foreign oil and contributing to our national goals for mitigating climate change.

Not surprisingly, the president’s FY 2011 budget puts money behind these initiatives. To get a sense of what is in the budget to support these goals, the section on investments in scientific research from the budget overview is worth quoting in full:

Investment in science and basic research is critical to long-term economic growth. That’s why the Budget invests $61.6 billion in civilian research and development, an increase of $3.7 billion, a 6.4 percent increase, and an amount that continues the commitment to double funding for three key basic research agencies—the National Science Foundation, the Department of Energy’s Office of Science, and the National Institute of Standards and Technology. This funding includes $1.8 billion for research in basic energy sciences to discover novel ways to produce, store, and use energy to address energy independence and climate change and $300 million for the Advanced Research Projects Agency-Energy, to accelerate game-changing energy technologies in need of rapid and flexible experimentation or engineering. (emphasis mine)

Let me finish by noting one particular area that was not funded in the president’s FY 2011 budget:  manned space flight. (Special thanks to CNAS’s Colonel Bob Killebrew for flagging this for me.)  I realize that it has nothing to do with natural security, but as a space geek (and someone who spent one of his more memorable childhood summers at Space Camp) I thought it prudent to highlight this.

According to The New York Times, “Mr. Obama’s proposal seeks to cancel the Ares I rocket, in development for four years as a replacement to the space shuttles. More unexpected, the request also would kill Orion, the crew capsule that was to sit atop the Ares I. The Orion is the only spacecraft in development that would be capable of traveling beyond low Earth orbit.” Instead, the budget allocates money to NASA in support of partnering with the commercial sector. The future of manned space flight could likely rely on commercially launched spacecraft – but it’s not clear how long that could take or whether it is even commercially feasible given the significant costs of space flight.

To be clear, however, the administration has not abandoned space exploration. "The Obama budget proposes spending $18 billion over five years for development of technologies like fuel stations in orbit, new types of engines to accelerate spacecraft through space and robotic factories that could churn soil on the moon — and eventually Mars — into rocket fuel," The New York Times reports. But with no timetable set for NASA astronauts to return to space after the shuttle program ends (with only five more launches left), it’s not clear when Americans might return to space exploration. One thing is for sure though: without a spacecraft that will take us back to the moon, it’s not clear when we’ll start harvesting helium-3 from the dark side of the moon.

Tune in the rest of the week to read from Christine and Dan on their major takeaways from the FY 2011 budget.

Photo: Courtesy of the White House.