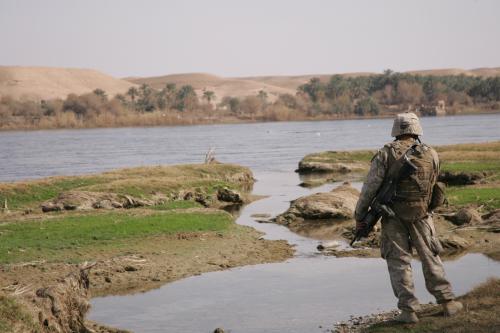 In Tuesday’s edition of The Independent, Patrick Cockburn shares his observations on the outlook for Iraq in the coming year, taking a rather dismal view of the country’s future.  Of particular interest is his reporting that Iraq, which at one point was forecast to be something of a breadbasket in the region, “has become one of the world’s largest food importers.”

The reason for this: a lack of water.

At our annual conference on June 11, Dr. Peter Gleick, from the Pacific Institute, provided historical examples of instances where water has been tied to or created conflicts, and discussed its potential for doing so in the future.  While America’s involvement in Iraq and the current level of conflict there obviously are not due to concerns over water, managing the drought will be an important aspect of any population-centric strategy employed by U.S. forces – even a year ago the Army was speaking of the need to engage with the State Department and USAID to provide more efficient agricultural technologies to the Iraqi people.

And, even though the conflict in Iraq may not be about water, water nonetheless factored into the way the conflict has played out, as NPR reported a year ago that insurgents “contributed to farmers’ woes by diverting their canals and burning their fields.”

Beyond provoking intrastate issues, water scarcity often threatens to complicate inter-state relations, and Iraq is no exception.  Indeed, one of the major foreign policy issues facing the nascent Iraqi government is water-sharing with their upriver neighbor, Turkey.  According to the Iraqi Water Resources Minister, unless water is freed up from dams upstream by Turkey, Iraq faces an “agricultural disaster” over the summer.  Ever since its reservoir first began to be filled, Turkey’s Ataturk Dam has provoked angry responses from the Iraqi government (with some of its other proposed dams similarly provoking international skepticism), and Reuters reports that Iraq still “accuses Turkey of choking the Euphrates with hydroelectric dams that have restricted the flow.”  For now, Turkey seems to have agreed to double the Euphrates flow, but it has made similar claims recently with Iraq claiming no palpable results.  Armed conflict between the two states over water seems highly unlikely given the plethora of domestic issues facing the Iraqi Army, but the situation is a good example of how shared water resources come to play a role in conflicts, especially those where the U.S. military is engaged.

Cockburn notes that until recently, high oil prices have paid for the food Iraq needs to import.  However, with oil prices down, the situation threatens to become increasingly dire.  Interestingly, oil and water scarcity are not necessarily unrelated subjects – in some situations a lack of water can effectively hamstring oil production, but that’s a subject we’ll hit on at a later time.

Photo: A U.S. Marine overlooks the Euphrates River near Haditha, Iraq. Courtesy of the U.S. Department of Defense.