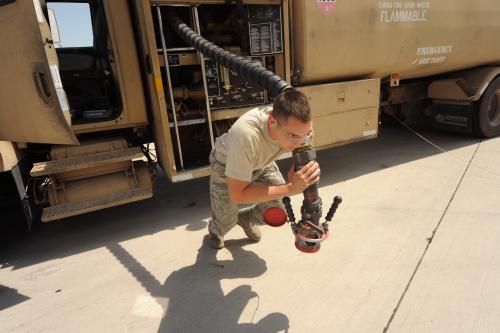 Yesterday, coverage from The Washington Post and The New York Times on the soon-to-be-released Obama’ s Wars, Bob Woodward’s latest opus, generated a media storm by reporting on the internal debate within the Obama administration over what the country’s exit plan should be for Afghanistan. With all the attention on Woodward’s new book, you may have missed this other report on Afghanistan from The Washington Post which pointed to a serious challenge that could compromise our war effort there.

The Post reported that Kyrgyz President Roza Otunbayeva is exploring options that would prohibit U.S. contractors from supplying fuel to the U.S. military base in Kyrgyzstan – a base critical to the U.S. war effort in Afghanistan. “In an interview, Kyrgyz President Roza Otunbayeva said private companies handling supplies should be replaced by a joint venture between a Kyrgyz state company and Russia's state-controlled Gazpromneft, a major source of jet fuel in the region,” the Post reported on Wednesday.

Northern fuel supply routes have become a more attractive option to Defense Department officials in recent months due to the fact that they are relatively more secure than shipping fuel in from Pakistan. In order to diversify its fuel supply sources and reduce the vulnerability of fuel convoys traveling in from Pakistan to insurgent attacks, the Department of Defense began “asking contractors to bring in more fuel supplies by northern routes,” according to a Washington Post report back in December 2009.

The U.S. air base at Manas, Kyrgyzstan has played a crucial role in the recent surge of troops to Afghanistan. But, as the Post pointed out, “The base also houses a fleet of air-tankers that are used for in-flight refueling of American warplanes over Afghanistan.”

The move by Kyrgyz President Otunbayeva has prompted some U.S. security analysts to consider whether Moscow has played some role in sculpting the ban which would affect military contractors at the air base in Manas. After all, Moscow has had longstanding mistrust and apprehension about the U.S. military presence in Kyrgyzstan, which Russia believes is in its sphere of influence. Indeed, The Washington Post pointed out that “the plan would provide Moscow with direct leverage over an American base outside the Kyrgyz capital, Bishkek, that serves as a vital logistics hub for U.S. military operations in Afghanistan.” Yet President Otunbayeva sang a different tune, suggesting that “Putting fuel supplies in the hands of a Kyrgyz-Russian joint venture…would boost trust between Moscow and Washington and serve President Obama's policy of seeking a ‘reset’ in relations with Russia.”

Yet with Russia’s history of leveraging its petroleum and natural gas resources in an attempt to shape the geopolitical chessboard, security analyst should be nervous. In January 2009, a standoff between Russia and Ukraine over natural gas pricing led to Russia cutting off its shipment of natural gas to many parts of Eastern Europe…in the middle of winter. Yet besides haggling over natural gas prices, the standoff had its roots in another issue as well: Ukraine’s interest in moving close to the West, in particular its interest in joining the North Atlantic Treaty Organization, which Moscow believed would compromise its sphere of influence in the once Soviet republic – and could prelude a greater effort by the West to impinge on Russia’s European balance of power.

Then again, the move by President Otunbayeva could also come in part as an honest effort to address corruption in the Central Asian state, an issue that fueled public anger and helped bring her to power.  According to the Post:

The Pentagon has relied since 2003 on two Gibraltar-registered companies for the supply of jet fuel to Manas and also to Bagram air base in Afghanistan. The two companies - Mina Corp. and Red Star Enterprises - are closely affiliated and have together been awarded Pentagon contracts worth more than $2 billion. Their ownership has not been made public, but they are believed to be largely controlled by Douglas Edelman, an American. Managers include several former U.S. military officers. Mina Corp. and Red Star have won plaudits from the Pentagon for providing reliable fuel deliveries but have also been dogged by controversy, including allegations that they worked with corrupt relatives of two of Kyrgyzstan's former presidents.

Whatever the motivations, it is clear that the U.S. military will need to consider a new strategy that helps to diversify its fuel supplies in order to hedge against becoming hostage to state-controlled fuel companies. That to me is as important a part of any conversation about our strategy in Afghanistan that seems to have been eclipsed by the recent news focus on the White House’s unsurprising, yet important debate about how to execute a war.

Photo: An Airman with the 376th Logistics Readiness Squadron prepares to fuel a Boeing 767 before it departs with soldiers heading stateside August 3, 2010. There are approximately 40 Airmen who pump more than 320,000 gallons of fuel a day at the Transit Center at Manas in Kyrgyzstan. Courtesy of Staff Sgt. Nathan Bevier and the U.S. Air Force.