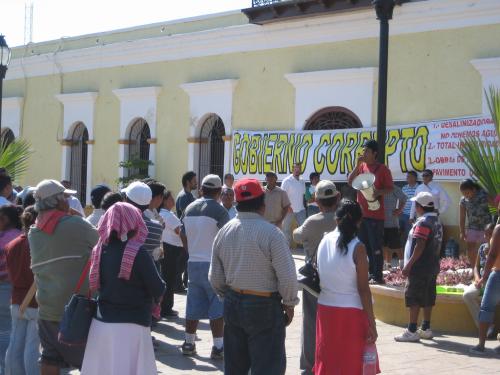 For the past several months the American media has grown increasingly fascinated with Mexico, with widespread coverage of the swine flu outbreak in April and May as a top news item. However, American media and the policy community – including CNAS’ own Col. Robert Killebrew – have been increasingly focused on Mexico’s struggle to contain drug-related violence and the growing power of cartels. Earlier this year, the violence reached such extreme levels that there was increasing talk of Mexico reaching failed state status. While this conversation has abated, a recent resurgence in cartel-related violence may reignite that debate and offer an opportunity to broaden the discussion to include other issues engaging recent events in Mexico.

What has been largely absent from the discussion to this point has been an examination of the myriad challenges facing the Mexican state, and their ability to exacerbate the more mainstream challenges that are tracked in the media. In particular, Mexico’s energy industry is largely looked at in a vacuum, rather than examined as an important component of the Mexican government’s ability to maintain a standard quality of life for its people. While Mexico is not widely acknowledged as a typical oil-exporting country, the oil industry is actually an extremely important sector of the economy.

Mexico’s oil industry is controlled by Petroleos Mexicanos (Pemex), the state-run oil monopoly. Pemex is controlled by the government, functioning as a de facto government department, generating oil revenues that fund about 40% of total state expenditures.

Unfortunately for Pemex and the government, the Mexican oil industry is quickly turning into a case-study of peak oil and the problems associated with national oil companies. Mexico’s oil sector has revolved almost entirely around one field – Cantarell – for roughly the last 25 years. However, Cantarell is now in the middle of an astonishing decline in production. Production has fallen from a peak of 2.2 million barrels per day (bpd) in 2005 to about 750,000 bpd, and both the U.S. Energy Information Administration and Pemex itself project that it will continue to average a 14% annual decline through 2015.  More importantly, there is little evidence that Pemex will be able to pick up the slack.

For now Pemex hopes to increase production from two other fields, Ku Maloob Zaap (KMZ) and Chicontepec, to make up for Cantarell’s decline. KMZ is slated to be the immediate offset to Cantarell’s drop in production, with Chicontepec being the producer of the future; there are, however, serious problems with this plan. KMZ is producing much heavier oil than it was originally predicted, and by Pemex’s own estimates its production will peak around 2011. Chicontepec, meanwhile, is a technical nightmare for Pemex and will seriously test its abilities.

One of the unintended consequences of Pemex’s monopoly and the preeminence of Cantarell in the national oil industry has been that Pemex’s technical capabilities have seriously lagged behind the times. Cantarell is an extremely small field for its production capabilities, located in extremely shallow water with very high initial pressure and very low water saturation – by and large, it has been an extremely easy field to develop and produce oil from. As a result, Pemex grew somewhat complacent in terms of developing new drilling capacity – its deep water capabilities beyond 1,000 meters are largely nonexistent and it was forced to close wells in Cantarell when water content reached even minimal levels (96% less than what U.S. wells are capable of handling).

As a result, deep water drilling is not an option in the immediate future. And Chicontepec will be challenging in its own right. The field is over 2,400 square miles in area – as opposed to Cantarell, which is about 70 square miles – and will require infrastructure development on a heretofore unprecedented scale for Pemex. In fact, Pemex estimates some 1,200 wells per year will be necessary. More importantly, the field will be technically difficult in terms of rock permeability and will produce heavy oil which will require expensive modernization of the country’s refining infrastructure.

For the United States, the national security implications of all this are twofold. First, Mexico’s declining production directly affects U.S. energy imports. Mexico is the third-largest exporter of oil to the United States. With its production falling, imports from Mexico will have to be replaced by imports from a different country, meaning a loss of diversity in oil imports and, more likely, an increase on reliance of Middle Eastern imports.

Second, this production decline will seriously impact the Mexican government’s ability to provide social services. As previously mentioned, oil revenues account for about 40% of state expenditure. With oil production in decline there will have to be significant budget cuts. With a rise in violence related to drug-cartels, budget cuts are unlikely to come from the judicial, military or law enforcement sectors, and are instead likely to come from social programs. If the state starts losing its ability to maintain the living standards its people expect, while losing control of swaths of territory to criminal gangs, the United States may face pressure to step up security along on its southern border to limit the knock-on effects from Mexico.

Furthermore, in the near-term, the U.S. Global Change Research Program (USGCRP) predicts that Mexico will face increasing water shortages that will have profound implications for its agricultural production. Already there have been disputes between the United States and Mexico over water usage, with Mexico experiencing sporadic shortages of water. These disputes are likely to increase as water scarcity becomes greater in the American southwest and in Mexico. In the long-term, the USGCRP projects that Mexican coastal communities will also experience consequences from rising sea level.

As with energy security, these issues will provide more challenges to an already over-worked central government. Revenue losses from the oil industry will also make it extremely difficult for the government to adequately adapt to these challenges and others, creating greater instability and putting additional stress on institutions that could falter.

So is Mexico a failed state? Absolutely not. By most accounts its reaction to the outbreak of swine flu were fairly admirable and demonstrated that the country has somewhat robust institutions. If anything Mexico has been accused of over-reacting to the swine flu epidemic. However, that does not mean that the potential for a serious decline in the state’s ability to govern in the future is out of the question. A massive crime surge coupled with declining state revenue and environmental stress that threaten Mexican livelihoods may create the perfect storm and make the situation much more dire. And for the U.S. security community, it is important to be cognizant of the way in which all these issues will engage each other and contribute to the challenges that lie ahead in Mexico.