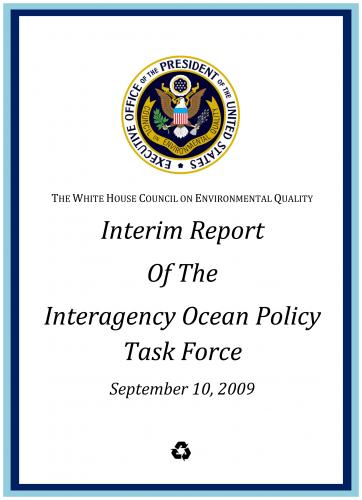 In June of this year, President Obama launched an Interagency Ocean Policy Task Force, a group of 24 federal agency representatives led by the Council on Environmental Quality tasked with charting a new path forward on coordinating U.S. government policies and actions related to oceans and coastal areas. After several trips, meetings, and town halls around the country, the Task Force issued an interim report last week, which Coast Guard Commandant Admiral Thad Allen tweeted, and of which he blogged, “This is an issue of critical strategic importance to our service and our vital public responsibilities as we carry out our maritime safety, security, and stewardship roles.”

The report sets the goals of ensuring that the country protects its marine ecosystems better, integrates science into management decisions, prepares to adapt to the effects of climate change, and balances these with security interests. It notes of our oceans that “their bounty contributes to our national well-being and security,” and that our “coastal regions and waters account for the great majority of the national economy” by supplying “food, fresh water, minerals, energy, and other natural resources and ecological benefits.”

Much of the news of the interim report’s release focused on policy changes that could affect offshore energy development. But for me the potentially more important aspect is that it recommends that the United States ratify the UN Convention on the Law of the Sea. Admiral Allen indicated this a few weeks back, stating during a live-blogging session which my esteemed colleague Will Rogers covered that “both the U.S. Coast Guard and State Department are in agreement that we need to find a way to ratify it.” With so much focus on tackling climate change and setting a cap and trade system, it will be interesting to see how the administration balances trying to pass multiple big environmental initiatives (on top of several other huge agenda items).

This Task Force might become the best example yet of the U.S. government fully integrating security and environmental concerns, taking the form of a National Ocean Council (NOC), the structure and function  for which pages 18-25 of the report map out in detail. Not unlike the National Security Council, the NOC would include most cabinet departments and representation from the National Intelligence Council and the Joint Chiefs. With this framework, the government intends to begin to “integrate ecological, social, economic, commerce, health, and security goals,” using “a coordinated and collaborative approach [to] improve its response to environmental, social, economic, and security challenges.”

As Admiral Allen blogged, “It is hard to find a section of this report where the Coast Guard does not have some interest and equities,” and I’d add ditto for the broader community of national security thinkers. The report itself lays out a good description linking U.S. security interests and natural resource issues, showing that the Obama administration defines security broadly and inclusively:

Agreed. Needless to say, we’ll provide a run-down of the final report when it lands, and we will begin to consider any possible implications of Law of the Sea ratification beginning this week with a look to what an old magazine article had to say on the topic.