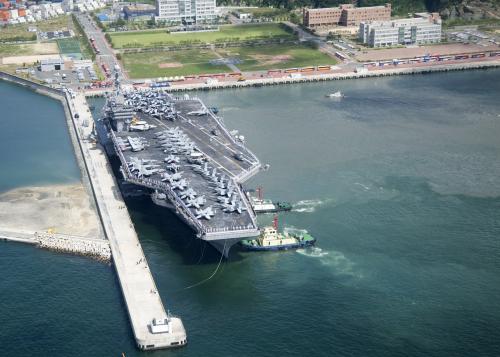 Following up on a story we highlighted here on the blog last Friday, China has issued a stern warning to the United States not to meddle in a longstanding dispute between China and its South China Sea neighbors over territorial claims to a string of strategic islands with deposits of oil and natural gas. The more assertive warning came several days after Secretary of State Hillary Clinton said that the United States had a “national interest” in freedom of navigation and open access of the maritime commons in the South China Sea.

On Friday, China “put American officials on notice that it will not brook foreign interference in the waters off its southeastern coast, which it views as a ‘core interest’ of sovereignty.” But yesterday, The New York Times reported a more direct warning from Chinese Foreign Minister Yang Jiechi that U.S. interference “would increase regional tensions.”

In an excerpt from the Times report published this morning, reaction to Secretary Clinton’s remark seemed to vacillate from diplomatic to less than so: “‘What will be the consequences if this issue is turned into an international or multilateral one?’” the Times quoted Foreign Minister Yang as published on the Foreign Ministry’s website. “It will only make matters worse and the resolution more difficult,” the web posting stated. Meanwhile, The New York Times reported China’s state-run media as labeling Secretary Clinton’s remarks as “an attack,” with an editorial appearing in People’s Daily that cited her remarks as American aspirations to “contain a China with growing military capabilities.”

Chinese officials have labeled the islands in the South China Sea as a “core interest” akin to Taiwan, Tibet and Xinjiang. While less familiar to some than those more mainstream disputes, “The area of contention, which spans 1.2 million square miles, is an increasingly important conduit for a third of the world’s maritime trade and much of the region’s energy supplies. Just as compelling are the enormous deposits of oil and natural gas thought to be under the ocean floor.” (Emphasis added)

“China has become more influential, it has also become uncharacteristically assertive in the diplomatic arena,” wrote Patrick Cronin, CNAS Senior Advisor and Senior Director of the Asia-Pacific Security Program, in The Diplomat on Friday. “This assertiveness is nowhere more evident than with its naval power, and is prompting many to ask if it is now verging on the reckless, particularly over the South China Sea.”

Indeed, China’s South China Sea policy may be evidence of a much broader challenge with a rising China. As Patrick Cronin wrote, “Beijing’s unwelcome intent appears to give notice that China is opting out of the Global Commons, and that the Western Pacific is not to be accessible to all, but instead increasingly part of China’s exclusive sphere of influence.” Perhaps then it’s not at all unexpected that China, in recent months, has warned foreign oil companies not to sign oil exploration contracts with Vietnam – who China skirmished with over the islands in 1988 – that would breach Chinese sovereignty in the South China Sea. The International Institute for Strategic Studies reported back in June that, according to the South China Morning Post, “Exxon Mobil had been told privately by Chinese envoys to pull out of its deals with Vietnam or face business reprisals in China.”

It is not clear how events will unfold in the South China Sea. But here’s a question for you to consider: With China recently surpassing the United States as the world’s largest consumer of energy, just how strategic are the islands’ potentially enormous deposits of oil and natural gas, considering that as China’s energy consumption increases, so too does its investment in alternative energy resources (already the world’s largest investor in wind and solar power)?

Photo: Just days after U.S. Secretary of State Hillary Clinton announced that the United States had a "national interest" in preserving access to the maritime commons in the South China Sea, the United States and South Korea began a combined maritime and air readiness exercise Invincible Spirit off the Korean peninsula. The USS George Washington (CVN 73) is shown pierside in Busan, South Korea, on 21 July 2010. Courtesy of Mass Communication Specialist 3rd Class Charles Oki and the U.S. Navy.