This blog long ago established a tradition of announcing the identities of its writers to mass yawns and mumblings of "yeah, so?"

As many of you already know and a few have probably worked out with a little cross referencing via google, my name is Amil Khan. 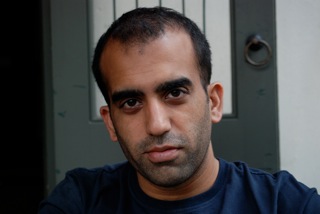 After a few cameo appearances as AM's "violent Pashtun flatmate", I first wrote for this blog nearly two years ago after returning from a trip to Lebanon that was actually supposed to be a holiday. I used to work as a Middle East correspondent for Reuters. After six years abroad, I left to come back to London and work on documentaries. Since then, I've had the privilege of working for the likes of Channel 4 and the BBC on topical foreign and domestic projects. My speciality is looking into why people do bad stuff. Mostly, I looked at Islamist extremism but I've also spent time investigating the kinds of extremism we see more often, such as racism.

Towards the end of 2009, I moved away from the world of day-to-day journalism and cast my net further a field. This blog had a lot to do with that decision. Some of the stuff I'm proudest of having written came about following conversations in Walthamstow with Abu Muqawama that started with the words, "OK, so I saw [insert strange occurrence]. Weird or what??." To which, AM's reply often was, "why don't you blog on it?"

Presently, I am working on a project in Pakistan that aims to challenge the religious legitimacy claimed by extremists operating there. And since I am what a friend calls a "recovering journalist", I exorcise my demons on this blog whenever time permits. I usually restrict my writing to this blog, however, my latest thoughts ended up on the Guardian's Comment is Free site.

I intend to continue writing for this blog. I haven't yet figured out why AM himself is on Twitter, but I might even give that a go some day. In the meantime, I'll be posting here whenever I get the chance. The intention will be, as always, to provide readers with the context behind the news rather than the news itself (this is done far better than we can manage by the likes of Reuters, BBC, AP and AFP). And as always, expect to find many references to things that have no broader intellectual interest whatsoever and are only there for amusement value.

Hell, at the very least, everyone can rest assured that in keeping with the house style of this blog, Londonstani will not be referring to himself in the third person.