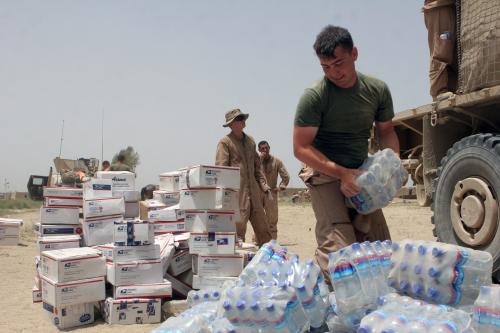 “If we don't have water, then we don't have the ability to perform,” said Tad Davis, the U.S. Army's deputy assistant secretary for environment, safety and occupational health, at an October 2008 Reuters Global Environment Summit, emphasizing the importance of water in U.S. military operations. Like fuel, without sufficient supplies of water we would be unable to sustain protracted military campaigns like we have done in Iraq and Afghanistan.

“Somebody recently said water's the new oil and there's a lot to be said for that," said Davis. And if we talk about water in the context that we talk about fuel as a logistics issue, then perhaps there is some truth to that statement. Operational fuel use has long topped the list of logistical concerns for military planners. The military requires enormous supplies of fuel in order to run its fleets of armored personnel carriers, tanks, humvees, helicopters, and planes, and to power forward operating bases (FOBs).

As a consequence of the military’s growing aviation, ground, and naval fleets and changes in favored vehicles, the military’s fuel consumption has dramatically increased over the last half century. Take for instance that during World War II, the military consumed approximately 1.67 gallons of fuel per soldier each day. As of April 2008, the military was consuming approximately 27.3 gallons of fuel per solider per day in Iraq alone; roughly 1.2 million barrels of fuel per month.  “Moving fuel to deployed forces has proven to be a high risk operation,” according to the Defense Science Board’s February 2008 report, More Fight – Less Fuel.

In Iraq, two-thirds of the military’s convoys carry either fuel or water, making them the two most important resources for sustaining U.S. military forces there. These supply lines are vulnerable to IEDs and other sabotage, often forcing the military to protect its convoys with heavier equipment.

The military has already begun to look at operational fuel use in the context of “'mission’ effectiveness” in order to mitigate the impact that the “long logistics ‘tail’ that follows troops into the war zone” is having on military resources. DOD is looking at alternative energy inputs, improved end-use efficiency products such as more fuel efficient vehicles and equipment, as well as structural improvements such as better insulation to reduce electricity demand at FOBs and thereby the number of fuel convoys needed to move throughout combat zones, minimizing the military’s vulnerability in this area.

But fuel is only one part of the equation: what about operational water demands?

Water still accounts for a fair share of the supplies delivered through military convoys. According to a 2005 interview with Army General Yves J. Fontaine, then-commander of the 1st Corps Support Command (Airborne) in Iraq, the Army was producing 3 millions gallons of water per day and delivered approximately 12 million cases of bottled water to forward deployed personnel and bases throughout Iraq over a 9 month period.

We can elucidate the issues and vulnerabilities with operational water by drawing parallels with our experiences with operational fuel. The military must ensure that its troops are adequately supplied with water for consumption and personal use, and for other purposes such as equipment maintenance. According to the U.S. Army Survival Manual – FM 21-76 –in hot desert environments like Iraq, soldiers need at least one gallon of water per day just to survive.

According to Davis, the U.S. Army is preparing to take steps to evaluate its operational water use by conducting pilot programs at domestic bases to “measure current water consumption, future consumption in five-year increments, the surrounding communities' water needs, and the available sources of water.” But water use at domestic bases does not necessarily equate with water use at FOBs. Though Army facilities as a whole have reportedly used 32 percent less water between FY2004 and FY2007, it is unclear how usage at FOBs has trended. Implementing environmental management systems that reduce water demands and improve wastewater recycling at fixed installations is relatively easy, often funded, and it may be more cost-effective. This is not always the case at FOBs. And though the military is committed to “reducing the environmental impact of defense activities,” including at forward installations, the same programs available at permanent installations may not be feasible or viable for FOBs given their operating environment and sometimes more limited resources.

As the military continues its drawdown in Iraq to increase its presence in Afghanistan, where, according to NPR, “There are few airports and no rail lines to speak of, so most supplies are trucked in from Pakistan on isolated roads rife with militants,” the different terrain and unstable security environment could present convoys with even greater challenges and vulnerabilities. The number of attacks against U.S. military and coalition convoys in Afghanistan is already trending upward. Reducing operational water needs with improved efficiency standards and conservation programs, just as DOD is trying to do with fuel (and borrowing its DSB report title), could help ensure more fight via less water.

Photo: U.S. Marines unload bottled water from a convoy at a forward operating base in the Helmand province of Afghanistan. Courtesy of Cpl. Randall A. Clinton and the U.S. Department of Defense.