There Will Be Blood, a 2007 film very loosely based on the 1927 Upton Sinclair book Oil!, is really only partly about oil. At its core, it's a story of a man who absolutely hates to lose, and who does a lot of bad things to fight his way upward to an empty success. Oil is merely Daniel Plainview's chosen weapon. But the film does say several interesting things about the oil trade, and about resource exploitation in general, that are relevant to this blog.

The movie hearkens back to the turn of the century oil rush in California, when one or two men—women are scarce in this movie—would wallow in the muck at the bottom of a deep hole and dig until the black gold welled up around them. Oil derricks were constructed from wood, and caught fire easily. Accidents were comm 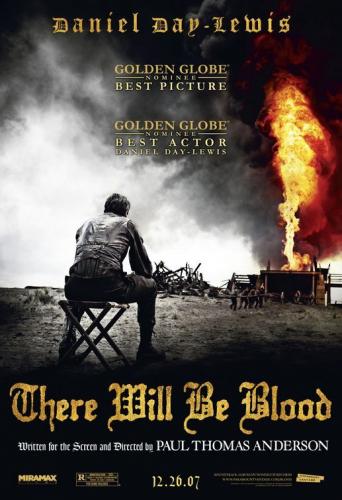 on and brutal: we watch two men struck down by falling debris they barely see coming. And the locations are all desolate. The ranch where Plainview makes his big discovery is mostly rocks, and nobody has had any success growing crops there. The film is careful to contrast Plainview’s car with the horses and buggies of the poorer local population. Not only is Plainview clearly set apart from the people around him, but he is helping spur demand for his own product by driving his car.

Plainview is clearly a hard, pitiless fellow, but he adopts the façade of a caring benefactor to New Boston, the little town with an “ocean of oil” hidden underneath. And the fact is, Plainview brings jobs and investment to the locals, building roads, a new school, new additions to the church, and better irrigation for their farming. He keeps the population happy by investing in their community. Even if it’s only a business strategy and not genuine philanthropy, Plainview’s investment pays off for the locals.

Modern-day resource companies would do well to pay attention. On September 21, the BBC reported on continued unhappiness with a Chinese oil project in Iraq’s Wasit Province. The China National Petroleum Corporation (CNPC) has brought almost no investment or jobs to that impoverished area. These lines from the report paint a vivid picture of al-Mazzagh village: “‘We thought everyone will find a job,’ said Zahi, a village elder. So far, [CNPC] have taken on just a handful of al-Mazzagh's residents as guards.”

CNPC’s presence has created unrest, including several acts of sabotage on the oil project itself. Resource extraction is invariably a disruptive business, and those doing the extraction need to be aware that their business can make some people very unhappy if their interests are not met.

Another theme driving the plot is resource transportation. Plainview strikes oil 100 miles from the coast, where he needs the oil to be in order to sell it. But he doesn’t want to pay hefty railroad costs, so he decides to buy up land and build a pipeline to territory owned by Union Oil, which will buy it from him. While Plainview may not have the same supply chain security headaches as do some modern companies, he understands the costs associated with transporting and ensuring delivery of oil. The U.S. Marine Corps is worried about transportation costs as well: the Corps has studied just how much transportation and security of supplies add to the cost of energy in their Afghanistan theater—or the fully burdened cost of fuel (pdf).

There Will Be Blood is certainly one of the best movies we’ve reviewed for this blog (until it implodes in the last 20 minutes, that is). It’s nice to see that all kinds of films, from great to garbage, deal with natural security themes if you look close enough. Now if you’ll excuse me, I’m going to get a milkshake and go bowling.