The Cable has posted the new National Security Strategy, due to be released today at Brookings. My initial impression, which I shared with my colleagues at CNAS, is posted below:

"Considering the financial crisis from which our country is still emerging, I am surprised there is not more in the National Security Strategy about the environment of scarcity in which the United States now operates. Strategy is, in part, about setting goals, prioritizing those goals, and matching resources to each goal. Aside from the section about spending tax-payer money wisely -- which seems more about reducing fraud, waste and abuse than anything else -- there seems to be little acknowledgment that the United States might not be able to pursue all of our national security goals as vigorously as we might like in part due to spending constraints. I'm still trying to understand how the acknowledgment that the United States must address its deficit to ensure our future security squares with a bold statement like 'the United States of America will continue to underwrite global security'. That is an especially bold claim considering the fact that this document seems to consider security to include not just physical security but economic security, food security, medical security and addressing problems of governance and reducing poverty outside America's borders. This document is much like the recently released Quadrennial Defense Review in that I liked a lot of what it had to say but was left unsure of what the administration's true priorities are heading into the rest of its term in office."

In summary, I would have liked to have seen a more ruthless prioritization of efforts. If I were a reporter working the national security beat and could ask Sec. Clinton just one question today, my question would be, "Madam Secretary, this strategy lays out some very ambitious goals for the United States. But if we could only do three of the things on the list of activities, what would they be? What, in other words, are this nation's top priorities in national security -- whereby if we get other stuff wrong but get these specific things right, we can sleep soundly at night?"

UPDATE: A couple of my friends have written some good dissenting opinions in reply to my comments. The first objection (written by my officemate, the GZA aka The Genius, and soon-to-be-posted in full on Tom's blog) is basically, "Exum, as usual, you're complaining too much. The NSS is not meant to match ends, ways and means. It is intended to outline the broader way in which the administration thinks about the contemporary security environment. The NSS can't allot resources because we have this thing called the legislative branch -- you may have heard of it? -- which does that. The QDR and QDDR are the documents that should then identify ends, ways and means."

My response to that is, uh, first off, the QDR preceded the NSS. Which, we can all agree, is as f***ed up as a football bat. Also, the QDR also punted on setting priorities, something that has frustrated both allies with whom I have spoken as well as key legislators. (See, Abe! I am aware of the Congress!) I will note my major complaint about all of this, though, after I cover the second objection.

The second objection is that these kinds of "strategies" are really just long political speeches focused on national security. There is a little in there for everyone, and everyone's activities and opinions are at least acknowledged if not promoted. The document is, at the end of the day, intended more for external consumption than for internal use.

The problem with this is the internal leadership vacuum that results. Like it or not, people in the Departments of Defense, National Intelligence and State -- not to mention USAID and the combatant commands -- will refer back to this document to justify their programs and budget requests before both the administration and the Congress. And who can blame them? It's an official document signed off on by POTUS himself. All of those good progressive voices who fret the military has too much power and is dictating strategy from below need to take note here: when you produce something-for-everyone documents like this NSS and the QDR which do not set firm priorities, you're essentially asking departments and commanders below you in the food chain to set their own priorities. Or, at best, you are forcing them to constantly be seeking guidance as to what your true priorities are.

I may be asking for too much -- I don't know. But both the QDR and this NSS strike me as thoughtful, intelligent, comprehensive and ... kinda empty. Because these documents do not establish clear priorities or recommendations, I am left studying the budget like everyone else for clues as to what the U.S. government's real priorities are for national security.

Patrick Porter, meanwhile, has an intelligent take on his blog, which doesn't feature comments so Patrick isn't bothered by hoi polloi like you.

Below is a picture of my office door. Nate rues the day I discovered the template for our office name plates on the CNAS share drive... 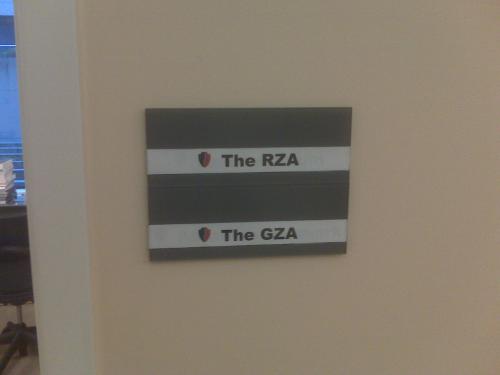