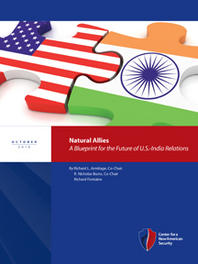 In keeping with the tradition of highlighting our CNAS colleagues’ work here on the blog, I draw your attention to a new CNAS report, Natural Allies: A Blueprint for the Future of U.S.-India Relations. The report is authored by two CNAS Board members, former Deputy Secretary of State Richard L. Armitage and Ambassador R. Nicholas Burns, and Senior Fellow Richard Fontaine.

One of the great things about highlighting our CNAS colleagues’ work is we can often draw connections to our Natural Security work, which demonstrates just how interdisciplinary this field is – and reminds us that natural resource issues cut across a wide spectrum of U.S. national security and foreign policy interests. But in this case we don’t have to draw the connection, as energy and climate change issues figure rather prominently in the U.S.-India blueprint.

As President Obama and the U.S. government continue to renew relations with America’s allies, energy and climate change issues – global challenges – are likely to be (or continue to be) important elements of those relationships moving forward. That’s certainly true of India.

On climate change, we saw last year in Copenhagen that “direct Indian engagement in these global negotiations demonstrated that it is essential to any international solution to this pressing problem,” the authors argued. Indeed, with Cancun just around the corner (next month in fact), it will be interesting to watch what role India takes on as an emerging regional powerbroker and member of the BASIC bloc - a grouping of Brazil, South America, India and China that serve almost as a counterweight to the United States and its developed country allies by resisting binding agreements on climate change that could undermine their own economic and national interests. Nevertheless, while there are some challenges, there are also clear opportunities for the United States and India to cooperate on climate change:

Given the divergence in views over caps on carbon emissions, the United States and India should focus on reducing emissions on the supply side – that is, through greater efficiency in energy production and distribution and the adoption of new green technologies. Such a focus will require greater protections for intellectual property rights in India. In addition, given the wide distribution of responsibilities for managing climate change issues, particularly within the Indian government, the United States and India should establish more direct bilateral channels for discussions and negotiations.

Bilateral progress can create positive momentum in multilateral frameworks, and the United States should enhance its climate change dialogue with the BASIC countries and the European Union in the post-Copenhagen era. Given the two sides’ differences, the United States should avoid pursuing agreements that will lead to zero-sum contests with India and other states that could become pillars of the emerging international order.

There are clear opportunities for the United States and India to engage on energy security, as well. As the authors note:

Currently, membership in the International Energy Agency (IEA), the major organization representing energy consumers, requires membership in the Organization of Economic Cooperation and Development (OECD). Given the unlikelihood that India will join the OECD in the near term, the United States should support observer status for India or the creation of an “IEA+2” or an “IEA+5” that would include India together with China and possibly a handful of other countries. The aim should be to ensure that India, a country with growing energy needs, has a seat at the table as IEA member states coordinate policy and discuss energy security issues.

As I alluded to before, energy and climate change issues are global challenges that require global solutions and partnerships. Our allies are the most logical partners for productively engaging in these areas, and it will be interesting to watch how prominently they play in our relationships as the United States renews its relations with longstanding allies, such as India and even Japan.

The U.S.-India blueprint, along with a series of working papers that focus on specific aspects of the blueprint, will be formally released this afternoon at a 2 PM event at the Newseum. Join us if you are downtown!