Londonstani woke up this morning to find out Lahore had turned into a war zone. 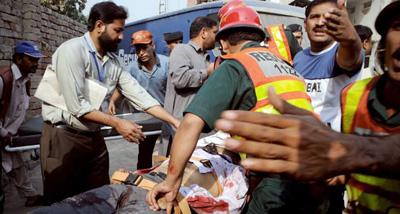 The city, which until earlier this year felt largely insulated from the problems on the western border, was the victim of three co-ordinated attacks in which reports say 24 people have been killed. Gunmen and suicide attackers stormed the Manawan Police Academy, the Elite Police training institute on Bedian road and the Federal Investigation Agency on Thursday morning, as officials continue to debate when to launch their offensive in Waziristan.

The authorities say the FIA incident happened first, at about 10am local time, when gunmen dressed in black with grenades and assault rifles stormed the building. The same building was attacked a few months ago.

Troop are still attempting to clear the attackers from the training institute on Bedian road. News channels are saying "security forces are avoiding a hostage situation such as in GHQ", a reference to another major attack on security forces last week. Considering that the news channels did not report hostages had been taken at GHQ, there is a real possibility the situation is worse than is currently being reported.

There was also a suicide attack at a police station in Kohat in NWFP. It's not clear how many were killed in that attack.

Psychologically, Lahore had thought itself far from Pakistan's insurgency problem until a string of attacks (including an attack on the visiting Sri Lankan cricket team) late last year and earlier this year made the reality of the situation painfully clear. There has been talk since the attack on GHQ last week that anti-Pakistan militancy is gaining followers in Punjab, Pakistan's biggest and most economically important province. When the Taliban claimed responsibility, they said a local cell had participated in the attack.

There are differences of opinion on whether the "Punjabi Taliban" are just fighters from FATA living in another part of the country. The key point for the authorities is whether Punjabi militants (if they exist in substantial numbers) are interested in fighting in Afghanistan, or are keen to take on the army at home.

Dawn news channel, which is owned by the same group that owns Dawn newspaper, Pakistan's oldest English language daily, had a retired brigadier general offering military analysis. With a hint of admiration the officer described the operation as "bold, accurate and precise". He added that the attackers had been better trained and more effective than the Pakistani army soldiers assigned to guard the facilities.

The military analysis at the moment seems to have accepted that like the attack on GHQ last week these operations are beyond the usual huge-bomb-packed-with-nails style usually favoured by low-tech mountain fighters. The brigadier general described al Qaeda as a high tech and capable organisation that has definitely had a hand in improving the quality of training of Pakistani militants. However, it's got to be said (and other military analysts have made the point) that the Pakistani army previously made sure these same sort of guys received pretty decent training. Londonstani remembers family members who served in the Pakistani army saying how ordinary Pakistani soldiers were pretty much always in awe of the dedication, quick wittedness, skill and resilience of the men they were training and sometimes serving with.

Dawn is known for its more considered editorial line (ie it's not about knee-jerk nationalism). The studio presenter made the point that "this is a homegrown problem". The retired officer added; "If India is behind this, then it is doing to us what we did to them in Kashmir. So, in a way, it's fair." Which underscores the point that Pakistani media opinion is defintely not monolithic and there is a place for voices that aren't parroting official lines

How to see this latest attack? The media, foreign and domestic, seems to be split between two narratives "Militants are getting stronger and we are stuffed" or "This is the last gasp of militants who are about to be ground to pulp by the army".

Londonstani sees it slightly differently. Historically, in the wider Muslim world and this part of the world in particular, the downfall of militancy of this kind is built into its success. It can only really thrive when it is seen as a by product of unpopular government policies, foreign occupation etc. But when the militancy gets powerful enough to pull off spectaculars like the operations today in Lahore, that's when the local population see it as a threat in its own right. When it starts looking like a realistic possibility (even if pretty distant) that Taliban types might soon be telling you how to live, ambivilance towards their activities falls away.

A classic example of this is Syed Ahmed, who rallied Pashtun tribes under the banner of Jihad to kick the Sikhs out of Peshawar in 1823. His downfall came after his army captured the city and he set about telling his allies how to be "proper Muslims". It wasn't long afterwards that he died in a battle against Sikh forces coming up to take advantage of internal divisions.

So basically, Londonstani is counting on their own successes shooting them in the foot instead of having any faith in interventions done by the Pakistani government or army, the Americans or anyone else.

Interestingly, Sayed Ahmed undertook his religious instruction with the son of Shah Waliullah. It's thought that Waliullah and Mohammed Ibn Wahhab (who developed the takfeeri ideology in its present form) had a teacher in common when they both studied in Medina (or that Wahhab was Walliullah's student). So when Saudi diplomats say; "Saudi Arabia and Pakistan have a people-to-people relationship that goes beyond governments" it's not just diplo-speak.