Londonstani spent the evening putting his very rusty Pashtu and Punjabi to the test talking conspiracies.

At the end of a long series of conversations it turns out that, basically, conspiracy theories are a sort of sport. You can find one for pretty much any point of view you want to take.

When it came to the attacks at the army head quarters in Rawalpindi, the theories range from the predicatable; that the Indians are working through the Taliban to take revenge for the attack on their embassy in Kabul, to the truly Machiavellian; that the army staged the attack itself to build up public support for a huge coming campaign in Waziristan. Another military-based theory states that the army knew the attack was coming, but let it happen in the hope it would generate public sympathy behind their opposition to the Kerry Lugar bill, which they feel is an American-civil government plot to curtail their power.

Some of the "real" Pakistanis kind enough to share their theories: 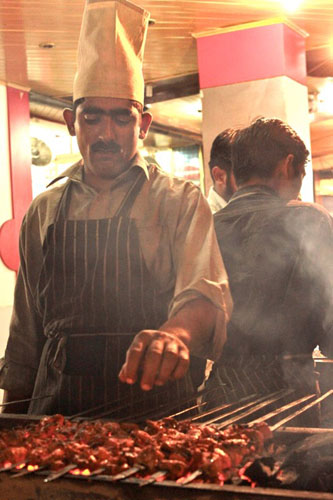 Now, the question really seems to be; what came first, the conspiracy culture or the vague official pronouncements?

Interior Minister Rehman Malik visiting wounded from the Peshawar: "Everyone knows who carried out these terrible attacks. We all know they are supported by outside powers and their various agencies." - Just for those of us who aren't totally clear, why not just spell it out? If they are killing your civilians through proxies, surely you can afford to risk annoying them by actually naming them?

An editorial in the Dawn newspaper however is totally missing out on the fun and trying to get all like.. serious, or something.

The question is, why in the face of such a threat and destruction do we casually steer away our intellectual and emotional energies towards abstract and rhetorical issues such as ‘sovereignty’ and ‘self-reliance,’ when we as a nation have exhibited such helplessness in addressing and arresting the more tangible threat and issue of mass terrorism?

Over and over again, many Pakistanis, their politicians, their glorified media personalities and holy men have tried to ignore the issue, treating it as a secondary phenomenon compared to the ‘more pressing issue’ of Asif Ali Zardari’s wealth, Altaf Hussain’s self-imposed exile and Meera’s domestic ordeal - as if trying their level best to obscure the issue of terrorism only because the bloodshed that takes place in the name of God might ridicule the already ridiculous notions of political Islam that the state of Pakistan has been flaunting for so many years now.

We all know about the why’s and who’s of terrorism in Pakistan. And yet, those who were lucky to survive terrorist attacks, or those whose loved ones were maimed so mercilessly in these attacks, we will go on wagging our fingers telling them they died because we are not good Muslims, or they died because certain elusive enemies of Islam are out to destroy our country and religion.

The hunt for the identities of the well-known yet unnamed perpetrators continues...