You're western European diplomatic staff in a country with a security problem, and the people kinda suspect that you and your ilk are to blame for it. However, the top priority for your and your international partners is winning hearts and minds and thereby defusing the security problem so people inside the country and abroad can go about without getting blown up. So what do you do?... Yep, drive around with a car full of illegal weapons.

From the Daily News; "ISLAMABAD - City police on Tuesday held two diplomats of Netherlands’ Embassy and recovered unlicensed arms and ammunition from their vehicle."

And then what do you do? Ask your American friends - who everyone thinks are out to destroy the country, but who are going to spend loads of scarce cash to try and change that view - to come bail you out of jail.

"The diplomats were later released, besides (ie. with) their weapons, on the intervention of top diplomatic officials from Netherlands and the US Embassy, sources told The Nation."

Just what you need when Pakistanis are debating whether signing a civilian aid deal will actually sell the country to an estwhile American ally who can't really be trusted.

Londonstani is not in a position to vouch for the reporting (when can you ever really do that unless you've written it yourself) but these seem to be the generally agreed details of the case. Various outlets differ slightly in details. The News, for example, says the weapons belonged to the Americans anyway.

"On search, police recovered sophisticated weapons including four hand grenades including two smoke equipments and two flash bombs, two handguns, four magazines and six bullet-proof vests from their vehicle. This arms and ammunition reportedly belonged to the US embassy and was being transported to the US Embassy by the Dutch, the sources said."

This sort of skullduggery - as it was described by a Pakistani friend - is not new. Apparently, these sorts of strange events have a habit of happening quite a lot in Pakistan and prove the prejudgement many people hold that the Americans, British, Israelis, Indians (and now Dutch) are secretly working to destablise the country. It's also a classic example of the kind of event that feeds into an understanding held by your regular person while outside observers are unlikely to hear about it. This event is front page news in every Pakistani newspaper I've read today (English and Urdu), while it's nowhere to be seen on the websites of the BBC, New York Times, USAToday or CNN. On a google search, I can only see the story coming up in Pakistani outlets.

It's said that "hearts and minds" is a difficult strategy to pursue because it's difficult for people from one culture to understand how those from another think and feel. Really? Why not just start with something easy like keeping your weapons in your embassy.. or at least getting proper permission to move them around. Failing that, what about some reporting that sheds light on the incidents that make local people go "WTF?!" so we can all get a little closer to being on the same page.

Things NOT to do in Islamabad when you are a diplomat... 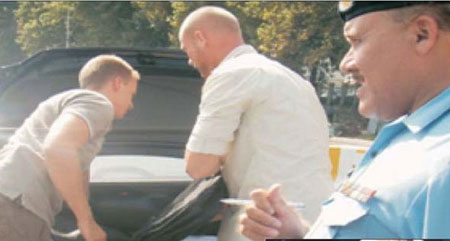