Kerry Lugar is the talk of Islamabad. And as tempted as Londonstani was at first to assume everyone was referring to a new pop star rival to Britney it turns out Kerry Lugar is actually a piece of US legisation that triples non-military aid to Pakistan.

Londonstani can only justify his shocking lack of knowledge of the wierd way in which Americans name their legislative acts by pointing out that reporting on this bill has been fairly scarce. But its low profile in the Western media is inversely proportional to the amount of air and conversation time the bill is receiving in Islamabad.

Reuters describes the bill as; "legislation (that) authorizes $1.5 billion a year for the next five years as part of a bid to build a new relationship with Pakistan that no longer focuses largely on military ties, but also on Pakistan's social and economic development."

An op-ed in the Boston Globe wonders why Senator John Kerry described his bill as a landmark achievement "when we have no idea where aid to Pakistan goes."

This is a totally sensible line of questioning when you consider how US aid to Pakistan during the Afghan war was diverted and used to build nuclear weapons or lined the pockets of corrupt officials and politicians.

But, from a Pakistani perspective, this is all missing the point. And Londonstani couldn't help but feel that the cross currents of the debate in Pakistan and the US is highly illustrative of the communication problem between the two countries.

At first glance, Pakistan is getting a bunch of cash from the Americans who  want to know that its not going to end up in military programmes, training for Bombay style attacks while securing assurances that the nuclear supermarket the Pakistanis were running until very recently will be put to an end. Any right thinking Pakistani would want foreign aid to actually help alleviate poverty and not fund the generals, right? Everyone should be happy. In fact, your average Pakistani should be ecstatic, right?

Well not exactly.. not even close. Government officials have been on TV and radio day and night trying to convince the public that the aid is a good idea. Parliament is bogged down with MPs asking pointed questions and demanding answers about the strings attached to the cash. What's their problem? Well, in a word, dignity.

A Pakistani friend who works with foreign missions and international bodies sums it up; "People want to know that the government hasn't sold the interests of the nation to an outside power.

It's that potential for differences of interpretation that's worrying my friend. For example, Reuters says "the bill also stipulates that U.S. military aid will cease if Pakistan does not help fight "terrorists," including Taliban insurgents and al Qaeda followers taking sanctuary along its borders with Afghanistan."

Do Pakistanis trust America to stipulate who is Taliban and who isn't? Would the Americans wave the bill infront of Pakistani officials and tell them to kill people protesting a drone strike? A lot of Pakistanis think so.

According to figures dug up by AP only $500 million of $6.6 billion in U.S. aid between 2002 and 2008 for fighting insurgents has actually been used for what it was intended. So aren't Pakistanis worried that whatever money is around will end up in politicians' pockets anyway? Well, yes, said my friend, but the bigger worry is that it looks like we are for sale.

Ever tried to tell a black community worker in Brixton that her friends and relatives needed to sort out the problem of errant fathers? No? Londonstani wouldn't be that stupid either, but has seen a local official try. After the meeting fell apart amid near violence, the community worker said, "sort out the discrimination, before you tell us how to live our lives." And that's what the Pakistani view of Kerry-Lugar reminded Londonstani of. "We have problems, but we won't be talked down to by the people responsible for our misery."

He avoided the other important theme - corruption - which Londonstani can't help but feel would have got a rather more cynical reception.

A bill with a girl's name that aims to improve the lives of Pakistan's people is attacked in Washington as huggy feely and unrelated to military aims. But the real tragedy is in Pakistan where it is dismissed as another Western plot to dismember the nation.

This is the real cost of the communication problem between U.S. officialdom and media on one hand and the people 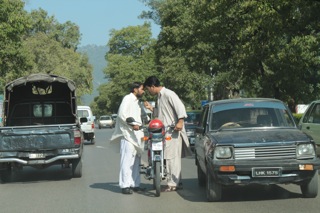 of Pakistan on the other. Not the government, but the public. Without a basic level of trust amongst Pakistanis in U.S. aims, the likelihood is that the money will end up fueling the kind of resentment it was meant to address. After five years, it might well have been more useful to have just chucked the cash in the sea.

Right, so how to communicate with the people? Any ideas?

Here's an idea of what communication problems lead to on the mean streets of Islamabad.