A suicide bomber killed around 30 people in Karachi today during traditional Shia Muharram ceremonies. It's not clear at this point whether the attack was part of Karachi's long-simmering sectarian problems, a statement of intent by the Pakistani Taliban to expand into the country's biggest city, or some sort of mixture of the two.

Over the past few weeks, suicide bombs and attacks in Pakistan have slipped from the news agenda. News coverage pays a decreasing amount of attention to events the more often they occur. Even though the loss of innocent life is equally tragic whether it is happening in the first attack of its type or the 100th, the Karachi attack deserves special attention because of its location and timing.

The Muharram ceremonies mark one of the main events in the Shia religious calender. Millions of Shia Muslims across the world mark the death of the Prophet's grandson Hussein in a one-sided battle as emblematic of the eternal struggle for truth and justice against overwhelming odds. Many non-Muslims will recognise Muharram ceremonies from images of bare-chested men flaying themselves in symbolic remorse for not coming to Hussein's aid.

An eyewitness told local channel Geo News that the suicide bomber detonated himself away from the main procession, which limited the number of casualties. Five security personnel died in the attack as well as a number of children. The explosion happened near a group of scouts who had been taking part in the procession.

Londonstani heard about the attack shortly after meeting a member of the Pakistani military. Predictably, the conversation revolved around the nature of Pakistan's security threat. Who was it exactly the army was fighting? Well, India of course, said the officer. Londonstani's arguments about India's own national interest in Pakistan's stability as well as the international community's stake in Pakistan's wellbeing and prosperity were all brushed aside. The army had proof of India's involvement, said the army man. Pakistanis fighting for the insurgency were illiterate young men led astray by foreigners bent on Pakistan's destruction. Many Pakistani officials Londonstani has met do not connect the country's present conflict to the internal tensions that exist within the country.

It's these tensions that are in danger of being further fanned by the attack in Karachi. Even though the official mindset refuses to accept that Pakistan's very serious social problems might underpin terrorism, many people were expecting the Shia ceremonies to be targeted. The only question was when, where and how bad. Londonstani's money was on Lahore, where a huge procession winds through very narrow streets. Shia leaders in they city's old quarter had told Londonstani that they had received direct threats from militants. Karachi, Londonstani thought, was too risky for the Taliban to target. Karachi is presently thought to be home to more Pashtuns than any other city in Pakistan. At the same time, the movement uses the city to raise funds and move supplies - alongside material moving to Afghanistan for ISAF. It's safe to assume whoever organised the attack had a larger aim.

A suicide attack suggests Taliban-style militants were behind the incident rather than Karachi's local Sunni thugs. Following the attack, enraged Shia worshippers set fire to nearby buildings and cars. As Londonstani writes, Geo News is reporting that fires are still raging in Karachi's commercial areas. 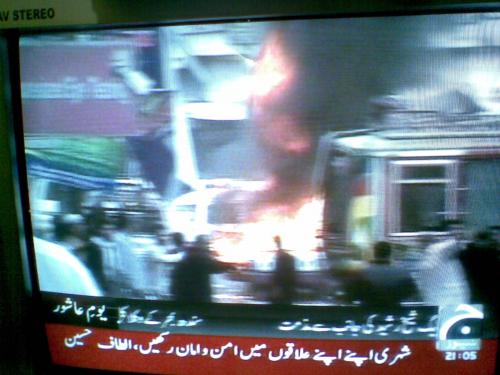 A Karachi resident told Londonstani over the phone; "What you are seeing in Karachi now with all the anger, rioting and burning of buildings is just a taste of what could happen. Karachi is more of a tinderbox than pretty much anywhere else in Pakistan and if someone wants to ignite a Baghdad-type inter-Muslim war in Pakistan, Karachi is the place to do it."

Shia leader Hasan Zafar Naqwi came on a number of the news channels denouncing the attacks. In the clips on the following news bulletins, the editors decided to repeat his comments that the terrorists who talk about countering America are only killing Muslims and damaging Pakistan. However, this was only a small part of what he said. His wider comments were much more telling of Shia reaction to the attacks.

"We have been killed in the hundreds for years. How long are we supposed to tolerate this?...I want to say to the nation, what have we done to deserve this? Lahore, Peshawar and now Karachi have become our Karbala," he said referring to the battleground where Hussein was killed. "We are mistreated yet where is the voice of the nation? When Shia die, no one says anything. The silent support that the terrorists enjoy has to end."

Karachi leaders, Shia as well as Sunni and representatives of various ethnic-based parties are appealing for calm. But Londonstani thinks the Naqwi's expression of anger at what he sees as Pakistan's Sunnis majority's disregard for Shia suffering will more accurately reflect the conversations that go on behind closed doors over the coming days.