On December 4, four militants stormed a mosque used extensively by Pakistan Army personnel and killed 35 people who had gathered for Friday prayers. Among the victims were 17 children. Security forces battled the militants for an hour before three blew themselves up. The attack marked a return to the sort of well-executed, multi-pronged tactics that militants have used against the army on previous occasions. But the choice of target - Muslims at prayer - forced a response from the country's religious establishment.

Right after the attack, Interior Minister Rehman Malik called on Pakistan's religious figures to take a stand. Within hours Mufti Muneeb ur Rehman, an influential figure within the religious establishment was on television.

"We have issued a fatwa that suicide bombings, remote attacks and direct attacks against civilians or the forces of an Islamic country are haram (Islamically forbidden)", he said. "Suicide attacks are specifically forbidden because they are carried out by killing yourself, which is totally outside the rules of Islam.... Attacking mosques is totally unacceptable in the eyes of Islam."

Mufti Muneeb represents a mainstream Islamic outlook in Pakistan known as Barelvi, which encompasses the country's Sufi traditions. Much has been made of Sufis as the mainstream - largely apolitical - Islamic outlook that has the potential to provide Pakistan, as well as the wider Muslim world, with the religious legitimacy to counter the austere Salafi and more specifically the Jihadi-Takfeeri ideology that the likes of the Taliban adhere to. In 2007, the Rand Cooperation published Building Moderate Muslim Networks, which advocates engaging and bolstering the Sufi strand of Islam throughout the Muslim world.

But is it really as simple as that? The phrase might have become a cliche but Pakistan is presently the location of a very real battle for hearts and minds. Is it possible to pick a side and support it against another?

The Sufi tradition has very deep roots in Pakistan. The country is dotted with shrines that are visited by thousands of people daily from across Pakistan's ossified class structure. Londonstani's taxi driver of choice is a fairly typical adherent.

Chacha (uncle) supports eight children on about £7.40 a day, which takes him 12 hours of driving to earn. His family is from Murree, a hilly area about 2-1/2 hours drive from Islamabad. But he spends most days of the week living in a small unheated concrete room outside a small stall owned by a relative who also works in the capital. Chacha has a terrible cough, exacerbated by his constant smoking and his taste for the local Murree whiskey. If he could afford it, Chacha would go to the doctors to find out how to treat it. But unlike Londonstani, he's not too worried about it:

"You know, I thank God because health comes from Him. And when you are ill, it makes you remember your own mortality. It makes you remember that you will go back to God and you have to answer for your actions. So in that way, being ill is a blessing because it will make me closer to God."

Conventional wisdom in Pakistan states that men like Chacha uncritically accept whatever they are told by firebrand preachers - of the religious or secular variety that dominate the pulpits and the airways. Chacha, however, is nobody's fool when it comes to current affairs.

"Some people in Pakistan love America and others hate it. The ones that love it are the educated people and those who travel abroad and like fashions from abroad. They have investments in America and they travel there. So its no surprise that they love it.

"For the poor people, they don't see anything good coming from the friendship with America. All we see is that we are suffering for America's war. We didn't invade any country and start a war. The fight is between al Qaeda and America? It's nothing to do with us. But because the people in government are friends with America, we ended up fighting for them."

Despite being very clear about which section of the population he belongs in, Chacha has not resorted to a blind hatred of all things American or Western.

Chacha is a follower of Pir Ali Shah, whose shrine-complex is situated on the outskirts of Islamabad at Golra Sherif.

Golra Sherif has attracted pilgrims for near two centuries. Every week, thousands of men, women and children gather in what has become a little town in its own right to hear Qawalis (devotional songs), pray at the various tombs and eat the food laid on by the shrine's guardians. 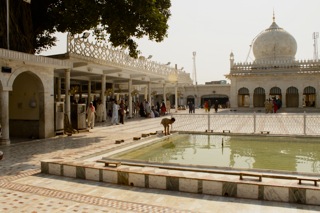 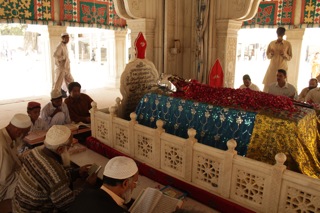 The outlook that includes Chacha and countless other Pakistanis is being challenged by the Takfeeri-Salafi mode of thought. The Taliban is the most vocal manifestation of this outlook but my no means its sole representative. Groups like Tehreek-e-Islam and al-Huda, while not explicitly violent, promote a "return to true Islam" message which sees the Sufi traditions of the country as a corruption of the true faith. Most of these groups are in some way or another an offshoot of the Deobandi school of thought which also gave birth to the Jamaat-e-Islaami political party which is sympathetic to the Taliban.

However, Deobandis are not monolithic in their outlook. The Deobandi school of thought started in India in 1866 as a reaction to the British takeover of Muslim India. Its core message is a revival of Islam throught through Islamic learning. Mulana Maududi, the founder of Jamaat-e-Islaami, was a Deobandi student but others within the school of thought separated themselves from politics. The Indian branch of the Deobandi school issued a proclamation in 2008 condemning terrorism. In Pakistan, the Jamaat-e-Islami has repeatedly refused to condemn the Taliban.

One consequence of the war in Afghanistan is the fracturing of Pakistan's religious patchwork quilt. Whereas once the fault lines lay between Shia and Sunni, these have now spread to Barelvi and Deobandis (who are both Sunni). As the Barelvis are seen to side with the state's stance against the local Taliban and its official backing for the U.S-led presence in Afghanistan, they have become exposed to allegations that they are "stooges" of "state-sponsored Islam". This has also opened them up to attack on religious grounds by the element of Deobandi thought that sees Sufi practice as unIslamic; a point of view shared by the Wahabis, Takfiris etc, basically, the kind of people who support the Taliban outlook.

A number of sources estimate that the majority of Muslims in Pakistan, India and South Asian communities in the United Kingdom are from Barelvi backgrounds. But whereas once the Deobandi-Barelvi divide was fairly pourous and devoid of any practical meaning, today it has taken on political connotations.

And those political connotations have very serious implications. A few weeks ago, Londonstani tagged along on a series of meetings organised by a British Muslim organisation that involved many leading Barelvi figures. One of the main issues that arose was the very real threat these figures faced if they took a stand against the Taliban. The delegation from Britain visited Jamia Naemia in Lahore, a Barelvi madrassa. The visit started with a prayer at the grave of the school's founder Sarfraz Naemi, who was killed by a suicide bomber weeks after denouncing the Taliban and issuing a fatwa against suicide bombings. It mattered little that he had previously criticised the government for its support of the U.S-led invasion of Afghanistan.

The explosive religio-political landscape of Pakistan is best illustrated by the security outside the madrassa guarding one set of Islam's guardians against another. 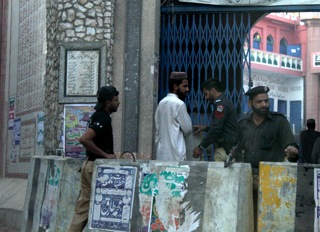 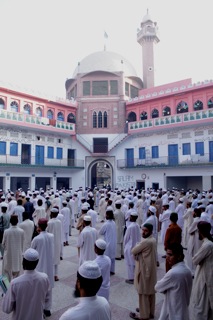 Mufti Muneeb was present during the meetings. He made the point that the Barelvis leaders knew that they had to make a stand, but were nervous as to what this would mean for the safety of their families and followers. The statement Mufti Muneeb made after the Rawalpindi attack did not mention the Taliban specifically. In reference to the attackers, he said: "We don't know who they are. But we hear from the media and the government that they say they are acting in the name of religion. That is why we issued a fatwa to refute their claims to have religious justifications for their actions." A few days after making the statement, Mufti Muneeb and several other leaders who echoed his call were laid up in hospital with suspected poisoning.

Supporting the Barelvis materially against the Deobandis is a dangerous logic to follow. It smacks of the sort of colonial and cold war era policies that pitted one group of "natives" against another and led to decades of warfare. At the same time, it overlooks the divisions within the ranks of Pakistan's "traditional Muslims". Any effort to provide material support would flounder at the first hurdle of who to distribute it to. But one practical and realistic suggestion the Barelvis did raise was of moral support from the wider community of Islamic leadership. Despite their numbers, the Barelvis are in danger of being bullied into silence. Their stance makes them appear as government - and therefore Western - stooges. Their opponents portray them as quietist fatalists who are unwilling to stand up for the honour of Islam. And if their opponents dominate the public Islamic discourse - as they are on course to do - anyone in Pakistan who opposes armed insurrection against the state and a fight to the death against anything that hints of tolerance, moderation and discourse will be forced into silence. The medium term consequences for Pakistan, the region and the international community will be dire.