A few people have been wondering about what Pakistanis make of the recent attacks that have taken place all around the north of the country. Londonstani has been travelling around the region for the past couple of weeks, and unsurprisingly the most recent violence, mainly aimed at civilians, has been a hot topic of conversation. People's opinions are sometimes bewildering, insightful, thought provoking and/or frustrating but they are by no means monolithic. And since it's rare to hear the views of the average Pakistani citizen in daily news reports.. at least anything more than a 5 second sound bite... Abu Muqawama brings them to you here, in technicolour. 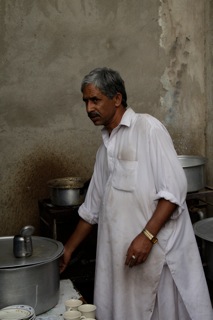 "But I tell you one thing, whoever is doing this is Pakistani. That's for sure. They might not be doing the right thing, but they aren't coming over the border from India.  Whoever is paying them and convincing them to do this might well be from abroad, but those people are finding recruits out here. I blame the mullahs to some extent. When Pakistan was fighting India, the mullahs were on hand to say that it's OK to go to certain death when you have no other option. Now they are saying suicide operations are wrong. It's confusing for simple young people. But more than that, it makes the population even more convinced that the mullahs who are working in official circles are 'bought mullahs' whatever they are told to say, they say. So people have now decided not to listen to them.

"In this area, we all think the government is paid for by the Americans. This isn't a Pakistani government. It's a wing of the American government. They do what the Americans want and not what we want. I remember when things were a bit better. I remember learning about what Pakistan could be. What our hopes were. But the young people now don't see that. They just see a government that helps the Americans fight in Afghanistan while it robs us. 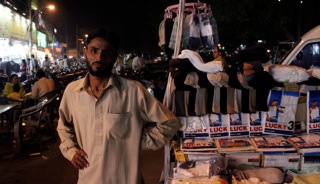 "The Indians are doing to us what we did to them. It makes me laugh when I read the newspapers. I see articles about fighting in Kashmir where we call the gunmen in Indian "fighters" and in the next article about what is happening in Pakistan, we call the same people "militants" or "terrorists" because they are fighting us! That says it all really doesn't it? Do we like these people or not? We can't like them if they are on that side of the border and not like them when they are on this side. That just doesn't work.

"Pakistan is in a rough neighbourhood. We have a new world power on one side, a little below that we have a sworn enemy that is quickly becoming powerful. On the other side the Americans are in Afghanistan. While at the same time, they seem to be making trouble here. And then there's Russia. Pakistan played a pretty large part in the beating they got in Afghanistan. I'm sure their hand is behind some of what is happening because they want some revenge.

"Big city people only talk about what happens in Islamabad and Lahore. We have been suffering for years. There are smaller bombs everywhere in Punjab. If it's not the Taliban then it's shia trying to kill sunni and the other way around. People are getting caught in the middle like always and paying the price.

"In my village, people have died in attacks that don't even make the newspapers. We also have people getting taken away in kidnappings. Then, once the police get involved, then its even worse because they just start arresting people all over the place and you don't know where that person is or when they will come back to their families." 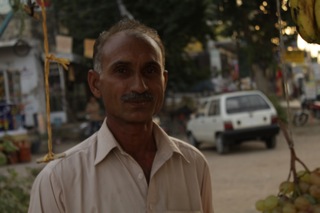 "No real Muslim would kill civilians and the Taliban have said they don't target civilians. But what I'm saying is that the Taliban who do this are not Muslims.

"We definitely have a huge extremism problem. And those extremists are not Muslims. They are young people who have been led astray. Maybe some of them just want to fight and they say its in the name of Islam because it's better than saying 'I like to fight and kill'. If they did that the government would bomb them to hell and no one would care. You can cover many sins in the name of Islam.

"It's a real tragedy because religion is supposed to make people better. The Taliban are blowing up shrines and talking about killing people who go to them. Is this the act of proper Muslims? No way.

"This extremism problem is spreading everywhere. People used to be interested in poetry, in peace and in doing good works now its all about banning television and killing people who play cards, people who smoke hookah, people who sit in tea houses. The sad thing is that there are people saying this is Islam, and there are more and more people believing it."

In Londonstani's view, people have a really hard time accepting that people who are similar to them could take something they see as a positive force and use it to justify killing innocent people. The far easier explanation is that other people are to blame and they are trying to discredit your shared religion/culture etc. This is true not only for Pakistanis but for other Muslims and applies equally to people in the UK and US who have a hard time imagining "Our Boys" committing war crimes. It's easier to accept that criminality is to blame for death and destruction because criminality is an aberration of normal society anyway, but its harder to accept when it looks like the destruction is supposed to be an authentic growth out of your own society, when you "know" it's not an authentic expression of your society.

At the moment, people just want the attacks to stop. Questions of who is to ultimately blame have pushed to the back of people's minds. It looks like a small window off opportunity when Pakistani public opinion and Western understanding is on the same page. However, as soon as the immediate threat has receded, opinion polls suggest the mistrust will be back with a vengeance. Figures in the newspapers (that arent to hand now) show that way over 50 percent of Pakistanis see America as the country's biggest threat, 17 percent see India as the biggest threat and just under 10 percent put the Taliban in that position.

It has to be said, from the point of view of your average citizen, like the good people above who gave me some of their time, there was no Taliban in Pakistan when there was no America in Afghanistan. And in much the same way that Americans and Europeans can say, "Just leave them to kill each other", Pakistanis can say, "al Qaeda attacking America is not our problem. America pissed them off not us." But then your average Pakistani citizen knows or cares little about how successive Pakistani militaries were building up the capacity of extremists to fight wars for them on the cheap. And if they did, they probably wouldn't give much thought to the fact that such a relationship is ultimately not sustainable, because at some point the two parties' interest will diverge. If it wasn't the "war on terror" that made the Pakistani government "infidel" in the eyes of the Lashkars, Sipahes and Jamaats, it would have been something else.

In terms of WTF is going on... Londonstani has spent time in a couple of places where conflict is brewing or escalating and has found that such situations have a logic and momentum of their own. In such circumstance, societies rapidly move in directions that locals struggle to comprehend and actors come to the stage with motivations and outlooks that the majority of the population don't even recognise. In that sense, many Pakistanis might think they "know" their fellow countrymen, but does a southern Punjabi really know where a tribesman is coming from? And in say five years, would they understand the motivation of a 17-year-old suicide bomber who equates the word Pakistan with venal officials and military action that killed his family and friends? And right now, how much would a Karachi trader who sells knock off TVs from China really understand what's going through the head of a kid from a dirt poor family who's been in a madrassa where he was taught relentlessly that only when the country adheres to "pure Islam" will God see fit to bring social justice to the land?

And like everything else, in essence that's a situation as true in Pakistan as it elswhere, as Londonstani recently found out when he worked on a documentary based around a white working class sink estate in England and found that many viewers from middle class backgrounds struggled to accept what they saw could happen in their country.