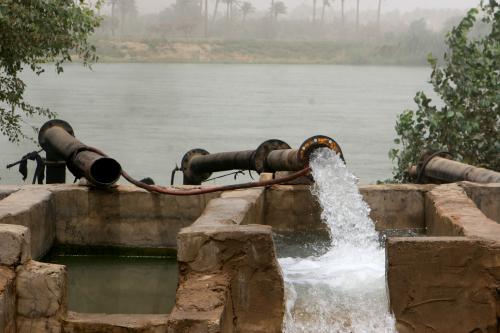 Turkey has long reaped the benefits as an energy-transit country, connecting Caspian and Central Asian producers of oil and natural gas with European consumers, raising its geopolitical profile as a global energy hub. But Turkey has started to expand its geopolitical role by leveraging other natural resources to its advantage. And as an upstream state with access to the Tigris and Euphrates rivers, Turkey is starting to see the benefits of using water as a tool to influence Middle East politics, especially in Iraq.

The Associated Press reported last week that tensions between Baghdad and Ankara were high, with Iraq continuing to accuse Turkey of failing to meet its commitment to increase water flow from the Euphrates River and help relieve water shortages that have “threatened agriculture and other industries.” A two-year drought has left Iraq parched and its agriculture dwindling – barley and wheat production has declined 95 percent in some provinces that rely primarily on rain-fed irrigation, for instance.

While some point to Iraq’s poor water governance, others blame their upstream neighbor Turkey and its hydroelectric dams. “The quantity of water received is less than half of the minimum that normally arrives in our country,” Iraqi Minister of Water Resources Abdul-Latif Jamal Rasheed told AP. “We have a real thirst in Iraq. Our agriculture is going to die, our cities are going to wilt, and no state can keep quiet in such a situation,” Ali Baban, Iraqi minister of planning, told the New York Times.

But politics also seems to be playing a role in shaping the water crisis in Iraq. Turkey is hoping that it will be able leverage its water resources over Iraq to get Baghdad to crackdown on rebels with the Kurdistan Workers’ Party, the PKK. Ankara has had a longstanding grievance with Baghdad for failing to reign in the PKK who continue to launch attacks on Turkish pipelines from Iraq’s northern antonymous region of Kurdistan.

In a joint press conference between Iraqi and Turkish foreign ministers last Tuesday, the two states have committed themselves to a “genuine and sincere desire to solve the water crisis.” Turkey has agreed to release more water from the Euphrates in return for Iraq bolstering its efforts to crack down on Kurdish rebels along its northern border with Turkey. “Now with this transformation of Iraq and the new dynamic for Turkey we think there's a need for reframing our relations,” Turkish Foreign Minister Ahmet Davutoglu said during the joint press conference. And it is becoming increasingly clear that water will be central to reframing the Turkish-Iraqi relationship.

If Turkey is successful in getting Iraq to crack down on Kurdish rebels along its southern border, it may set a precedent for Turkey to use water as leverage over Iraq. And unlike in this instance where water’s role as a carrot may help Turkey achieve a modicum of security from Kurdish attacks on Turkish infrastructure while benefiting the drought-stricken Iraqi people, Turkey could just as easily use its water resources as a stick to get Iraq to make concession it would not otherwise make. But in a fragile state like Iraq, playing politics with water may exacerbate existing grievances and foment more turmoil and violence; something to watch for.

Photo: As drought takes its toll on Iraq, an irrigation pipe siphens off water from the Euphrates River in Ameriyah, Iraq to provide locals with access to much needed water. Courtesy of Lance Cpl. Daniel M. Moman and the U.S. Marine Corps.