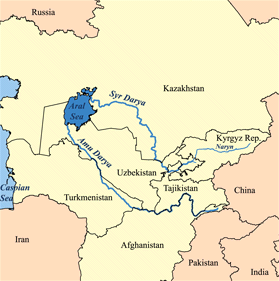 Last week, the Water Matters @ Columbia blog at the Earth Institute at Columbia University had an interesting post on a project underway at the Columbia Water Center where researchers are working to identify the complex environmental, political and economic challenges developing in Central Asia (Kyrgyzstan, Tajikistan, Uzbekistan, Turkmenistan, and Kazakhstan) around water issues. “A small nutshell description of a vastly complex situation: The five states are connected by two major rivers, the Syr Darya and the Amu Darya, which are fundamental to their survival,” writes Julia Hitz.

According to Hitz, during the Cold War, the upstream (Kyrgzstan and Tajikistan) and downstream (Uzbekistan and Turkmenistan) states had viable, mutually supportive relationships by which the upstream states, during the wetter seasons, produced electricity using hydroelectric energy facilities. During the drier seasons, upstream states released more water flow to their southern neighbors to use for irrigation, reducing their own energy production. In return, downstream states provided coal and natural gas to supplement their neighbor’s energy requirements. “This worked well enough as long as the Soviet State was enforcing the transactions,” Hitz notes.

“With the break-up of the Soviet Union, the newly independent republics had to either learn to work together on their own to manage and improve the system – or not,” according to HItz. “In actuality, each has tended to retreat into isolation, controlling their respective resources, water or energy, to their own immediate benefit without consideration for the needs of the other states.”

Today, Kyrgzstan and Tajikistan control the water flow of these two vital rivers and the amount released to their southern neighbors (not unlike the way Turkey and Syria control the water flow of the Euphrates and Tigris through Iraq), while the downstream neighbors have an abundance of energy resources in coal and natural gas. And while these states have retreated into isolation, the monopolization of water resources doesn’t appear to have generated much tension in the region as of late. But climate change may complicate the relationship if water resources in the region become increasingly scarce, potentially exacerbating water issues in Uzbekistan and Turkmenistan as their northern neighbors release less and less water downstream to sustain their own needs.

“In very general terms, over the next 50 years or so, Central Asia might see an increase in runoff from the mountains as warming temperatures melt glaciers,” reports Hitz. “After that, towards the end of the 21st Century, there is likely to be a pronounced decline in runoff as most of the land-ice will have vanished – less water for every need.”

Looking through a U.S. national security lens, it’s not difficult to see our inherent interest in a stable Central Asia – especially considering the tenuous situation to the south in Afghanistan and Pakistan. Looking long term, it is not unlikely that U.S. national security policymakers will keep attention in Central Asia (beyond just Afghanistan and Pakistan) even long after U.S. military operations in Afghanistan have ended.

As climate change comes to pass in the region, U.S. policymakers are likely to need a better understanding of what those manifested changes will look like and how they could undermine U.S. interests in the region. Though today, the relationship between policymakers and climate scientists is one left wanting of better communication and coordination. As we’ve noted here in the past, policymakers often don’t know what it is they don’t know and therefore aren’t sure what questions to ask of climate scientists. Meanwhile climate scientists have traditionally been unable to speak “policy” to policymakers in a way that actionable decisions can be made (you can read more about this in our report, Lost in Translation: Closing the Gap Between Climate Science and National Security Policy).

With that said, I think it’s significant to note that the analysts at the Columbia Water Center plan to adapt their findings into a policy paper “for a professional audience,” while also providing their research to an academic journal. And it is equally important to note that researchers are placing an emphasis on an interdisciplinary understanding of the challenges in the region, and not just on the physical science challenges: “The answer, they [the researchers] say, lies in an interdisciplinary understanding of the problems, and a collaborative approach to solutions.” The interdisciplinary approach will likely help navigate some of the challenges of understanding the social science consequences of environmental change, fostering a better understanding of not just the inherent economic, political and social challenges, but the opportunities for those states to work together to preserve stability in the region as well.