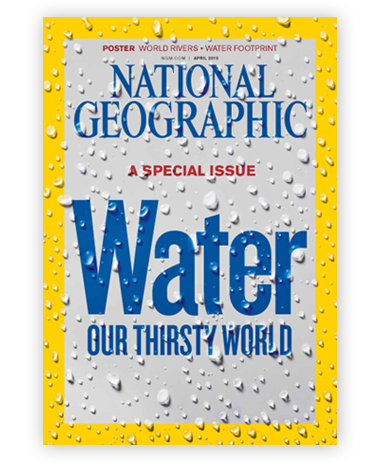 As the headline states, I recommend to anyone reading this blog that they give a glance to the current special edition of National Geographic on water issues. It highlights water challenges around the world and, as it is famous for, intersperses the text with gorgeous (albeit in some cases slightly creepy) photos.

I found the article on the Tibetan Plateau to be the most useful. Given the recent revelations that the IPCC’s climate change projections for this region’s glacial systems were not derived from rigorous assessments, the evidence and information collected by local and regional scientists and citizens presented in this piece are useful additions to the available body of info. A few highlights:

Around a bend in the river, the glacier's snout finally comes into view: It's a deathly shade of black, permeated with pulverized rock and dirt. The water from this ice, once so pure it served in rituals as a symbol of Buddha himself, is now too loaded with sediment for the villagers to drink. For nearly a mile the glacier's once smooth surface is ragged and cratered like the skin of a leper. There are glimpses of blue-green ice within the fissures, but the cracks themselves signal trouble. "The beast is sick and wasting away," Jia Son says. "If our sacred glacier cannot survive, how can we?"

It is a question that echoes around the globe, but nowhere more urgently than across the vast swath of Asia that draws its water from the "roof of the world." This geologic colossus—the highest and largest plateau on the planet, ringed by its tallest mountains—covers an area greater than western Europe, at an average altitude of more than two miles. With nearly 37,000 glaciers on the Chinese side alone, the Tibetan Plateau and its surrounding arc of mountains contain the largest volume of ice outside the polar regions. This ice gives birth to Asia's largest and most legendary rivers, from the Yangtze and the Yellow to the Mekong and the Ganges—rivers that over the course of history have nurtured civilizations, inspired religions, and sustained ecosystems. Today they are lifelines for some of Asia's most densely settled areas, from the arid plains of Pakistan to the thirsty metropolises of northern China 3,000 miles away. All told, some two billion people in more than a dozen countries—nearly a third of the world's population—depend on rivers fed by the snow and ice of the plateau region.

But a crisis is brewing on the roof of the world, and it rests on a curious paradox: For all its seeming might and immutability, this geologic expanse is more vulnerable to climate change than almost anywhere else on Earth.

The author goes on to quote an eminent Ohio State professor, to boot. This later paragraphs gets to the heart of matters starkly as well:

This situation—too much water, too little water—captures, in miniature, the trajectory of the overall crisis. Even if melting glaciers provide an abundance of water in the short run, they portend a frightening endgame: the eventual depletion of Asia's greatest rivers. Nobody can predict exactly when the glacier retreat will translate into a sharp drop in runoff. Whether it happens in 10, 30, or 50 years depends on local conditions, but the collateral damage across the region could be devastating. Along with acute water and electricity shortages, experts predict a plunge in food production, widespread migration in the face of ecological changes, even conflicts between Asian powers.

Of course, the better we understand this challenge, the better we can ensure that “devastating” is not the right word for the sentence above. Indeed, one of my favorite things about this Nat Geo is that it also highlights solutions to the water problems it describes. Overall, this is quite a relaxing way to do a little bit of research on what the media is reporting on water, which we can all use now that spring is here.