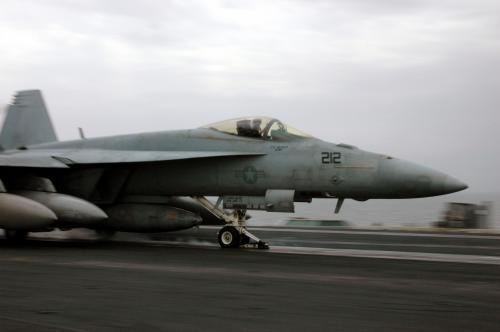 Earlier this week my colleague Christine Parthemore and I wrote about CNAS’s recent excursion aboard the USS Harry S. Truman, a Nimitz-class carrier whose tactical air wing consists of F/A-18C/D Hornets and F/A-18E/F Super Hornets. For this week’s Reading Old Magazines I wanted to look at the history of the F/A-18 fleet, specifically around concerns over fuel performance. I dug up an interesting story by Lyndsey Layton of The Washington Post from March 25, 2003, just days into Operation Iraqi Freedom: “Modified Fighter Jet Lends More Fuel to the Fight.” (Subscription required. It is obviously not an old magazine, but some days an exception is in order) Layton’s piece does a great job of framing operational energy security in the context of yesterday’s battles and today’s wars.

According to Layton, shortly after U.S. combat operations in Iraq began, the U.S. air campaign shifted from bombing fixed Iraqi targets to bombing soldiers and weapons in the field. However, the U.S. Navy quickly realized that the fuel performance of its strike fighters was impeding its ability to carry out protracted missions that required jets to loiter in the skies above Iraq.  “For those missions,” Layton wrote, “pilots [needed] to circle over Iraq for long periods, awaiting calls to strike Iraqi units menacing U.S. ground forces making their way toward Baghdad.”

As Layton wrote, these air-to-ground support missions required strike fighters to fly up to four hours, having to be refueled every 90 minutes. This created mid-air traffic jams with conventional tankers, Layton reported. “Several pilots had to abort missions because they couldn't get enough fuel,” Captain Scott Swift, then deputy commander of the air wing on the USS Abraham Lincoln, told the reporter. “We were cutting sorties drastically to optimize fuel.” Air wing squadron leaders even told Layton that “much of the daily planning of the air war [had] been dominated by strategies for optimizing mid-air refueling.”

Layton explained another issue that troubled military commanders with mid-air refueling. Because conventional tankers such as the Navy’s S-3 Viking or Air Force’s KC-10 Extender did not have defensive weapons, they were not permitted to fly in hostile airspace. Instead, “they [flew] patterns over the Persian Gulf or friendly countries such as Kuwait, forcing the strike planes to fly out to them for gas and then fly back another long distance to reach targets inside Iraq,” Layton said.

In order to maximize the Navy’s operational efficiency and mission effectiveness, Captain Swift developed a plan to modify the single-seat F/A-18E Super Hornets, transforming them into tanker jets in theater. According to Layton, “the Navy took the unusual step of removing bombs from four of its 12 F/A-18E Super Hornet fighter jets and replacing them with fuel tanks, converting the high-performance jets into airborne gas stations.” The plan included leaving the Super Hornet’s air-to-air missiles attached, along with its Vulcan 20mm cannon, giving it defensive capabilities and allowing it to perform mid-air refueling in the skies over Iraq. What is more, Captain Swift told Layton, is that these modified F/A-18Es could “give out twice as much fuel to other jets as an S-3 tanker,” and, according to the Federation of American Scientists, with structural improvements had already extended its mission radius by 40 percent compared to the F/A-18C/D Hornets – which meant longer missions to perform mid-air refueling.

Modifying the F/A-18E clearly allowed the strike fighters to remain engaged in the fight longer, rather than having to evacuate to friendly airspace in order to refuel. But the modification was obviously a stopgap solution in order for the Navy to accomplish its mission. One of the more interesting take-aways from our visit aboard the USS Truman was that some of the greatest innovations, including those that improve energy security, come from the grassroots level – from individuals like Captain Swift who adapt in order to improve how they operate. Needless to say, the Navy’s modification of the F/A-18E is a great example for how our military leaders adjusted to operational challenges in order to accomplish their missions.

Photo: A modified F/A-18E Super Hornet tanker jet launches from the flight deck aboard the Nimitz-class aircraft carrier USS Ronald Reagan to support other aircrafts with fuel during flight operations in February 2006. Courtesy of Mate 3rd Class Aaron Burden and the U.S. Navy.