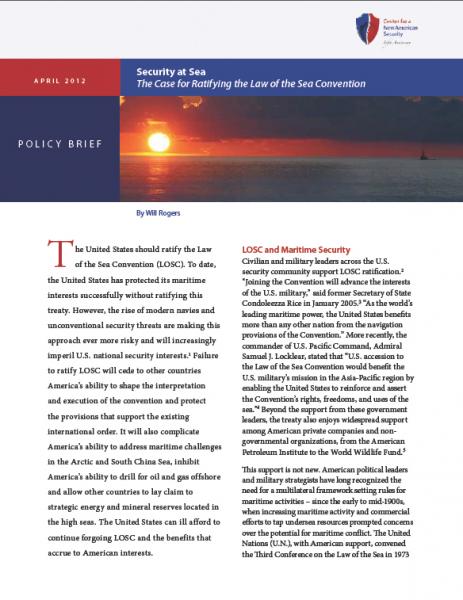 Later this morning CNAS will release a new policy brief that explores the national security and foreign policy benefits of ratifying the Law of the Sea Convention.

Download Security at Sea: The Case for Ratifying the Law of the Sea Convention here.

While the United States has to date protected its maritime interests without ratifying the Law of the Sea Convention (LOSC) – relying instead on the protections afforded by customary international law – the rise of modern navies and unconventional security threats are making this approach increasingly risky and will imperil U.S. national security interests. LOSC is the only global maritime regime that codifies longstanding maritime norms that are consistent with U.S. interests and protects the status quo. By failing to ratify LOSC, the United States forfeits its ability to shape the interpretation and execution of the convention and protect the provisions that support the existing international order, with consequences that will last for decades. Ratifying the treaty would demonstrate that the United States is serious about upholding international norms on maritime issues at a time when rising powers are challenging existing rules at sea and, as a result, American interests.

But what are those interests? How will LOSC specifically help the United States secure its access to the maritime domain, and achieve broader foreign policy and national security goals? That is the subject of Security at Sea. And while the list of benefits is extensive - and my effort to explore the benefits is by no means exhaustive - there are some specific security issues that I think will resonate with U.S. policymakers. As I argue in the policy brief, ratifying the treaty will:

While LOSC is no silver bullet – it won’t help address every challenge that the United States will confront at sea – ratifying the treaty will improve America’s ability to protect many of its global interests by providing a stronger legal foundation for its own maritime activities and helping to shape and enforce international norms and legal authorities. It is time for the U.S. Senate to ratifying LOSC and allow the United States to take advantage of the benefits that will accrue to American interests.